Last week Villarreal made the big mistake of thinking they’d won the tie. But all they’d done is make themselves favourites going to Anfield, where Jürgen Klopp’s football is never better than when its metal, and has to be heavy. 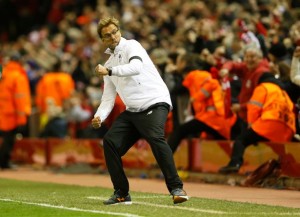 When Liverpool led 1-0 in the League Cup semi-final, it was easier for Stoke to play on Anfield nerves. But the Reds have come a long way since then. Even so, often narrow first-leg leads are harder to defend; as brilliant as Rafa Benítez was in Europe with Liverpool, the qualifying games, often played with narrow leads, were harrowing viewing. The Reds scraped through, but if they’d been 1-0 down going to any of those games they could have torn into such minnows. Nerves are such a big factor in football – dealing with them, and finding ways to ignore them.

Dortmund had earlier made the mistake of going two-nil up against Klopp’s Reds. Football is so much harder when you’re the favourites, and I was calm – indeed, strangely happy – after the 1-0 defeat at Villarreal, precisely because I prefer the Reds to play with some kind of (small) mountain to climb. There can be no half-measures when you know you must win.

Holding onto a slight lead for 90 minutes can be excruciating, and the atmosphere from the crowd is very different.

Indeed, Klopp has done so much to change the atmosphere. It was one of the first things he addressed. No small part of Leicester’s unbelievable success this season is the fact that the crowd were 100% behind them all the way; contrast that to the nervy, apathetic fans at Arsenal. Now, there are hundreds of other factors, including the demands of cup games, that can take a toll on a bigger club’s season, but the Kop was in a very different mood to when Stoke arrived in the winter, with the tie apparently already in the bag.

And in fairness, they’re getting a lot back from this team, and this manager. It’s a beautiful symbiotic relationship right now, and the scenes at the end, with Klopp fist-pumping all sides of the ground, was a joy to behold. (Villarreal, meanwhile, had just been fist-pumped too.)

Three put past Man United over two legs. Four put past Dortmund in one evening (after another one in Germany). Seven put past Man City in two league games. Three put past Arsenal. Three put past Chelsea at their place. Now three past Villarreal in 90 minutes. These are all top sides. And Spanish sides almost never lose to overseas opposition these days. There was an absolute gulf in class, and cojones.

The Reds have also put six past a couple of other sides, including the otherwise impressive Southampton, although Aston Villa may have their results deleted, on account of their utter uselessness.

Klopp has done all this with a team that had been goal-shy last season, and only scored more than one time in any of Brendan Rodgers’ 11 games this season.

The whole system is more balanced, and being able to defend better as a unit, and press in packs, makes life easier for the forwards. Being fitter, and pressing harder (and/or smarter) wears teams down, and although I stuck up for Rodgers until earlier this season, his sides could never attack and defend. It had to be one or the other; tightening up last season in some away games, but at the expense of his own team’s goals.

For Klopp to reach two finals in less than one full season is remarkable, not least because the Reds were hardly set up for glory in either: drab in Europe, and struggling past Carlisle in the League Cup; and a mixed squad that has picked up so many injuries.

He still doesn’t have all the players he needs, but he has enough to work with. On an off night for Coutinho – he didn’t play badly, but just couldn’t find space – Firmino set up three goals, Lallana flicked in a very clever third, and Sturridge showed that he’s a great footballer and a supreme finisher.

That said, if Divock Origi is fit he might go straight into the team for the final, given the way he worries defences both on and off the ball, and provides that electric pace that made the more average Jamie Vardy such a threat this season. But it won’t be an easy decision for Klopp to make. And Sturridge has shown, yet again, that he has to be respected.

But what about Emre Can? As good as Firmino and Lallana were – and indeed, James Milner – Can absolutely bossed this game, despite a spell out injured. He’s turning into the player everyone said he could be: a midfield beast.

The good news is that Sevilla should be favourites, after their recent success in the competition, but they haven’t been as good as Villarreal this season in La Liga. They’re a good side, but they’re beatable. The only downside about tonight could be that it was so one-sided that the Reds could actually be made favourites for the final – but just getting there has been a huge achievement given the situations Klopp’s side have found themselves in.

For now, we celebrate that achievement, and hopefully it gets even better in 13 days’ time.