The first ever European meeting between and Liverpool and Manchester United was overshadowed by unsavoury chants from the away end, with sections of the travelling support heard singing about the Hillsborough disaster on several occasions.

However, a Uefa spokesperson has confirmed United will not be punished for the incident because the chanting was not mentioned in the match officials’ reports.

Presumably because they were not familiar with the linguistic and contextual intricacies of the matter. And why would they be?

Roberto Firmino says Jürgen Klopp is the best manager he has ever worked with, insisting he and his teammates are making big improvements thanks to the German’s guidance. (LiverpoolFC.com)

“I don’t say that because he picks me all of the time. It’s because of his mentality and personality.

“He gives confidence to all of the players. He knows what your potential is, so he always says just one or two words to give you confidence and show trust.

“That’s important for players. I think everybody likes working with him and we are all improving because of him.”

Lucas Leiva‘s recent stint in defence for Liverpool has left the long-serving midfielder open to the possibility of more games at centre-back in the future. (LiverpoolFC.com)

Mario Gotze has revealed he is on texting terms with Liverpool boss Jurgen Klopp. (Liverpool Echo)

But the Bayern Munich midfielder, frequently linked with a move to Anfield, insists they have not discussed a potential transfer.

However, see ‘Transfer Rumours – LFC’ below on ‘Monday’.

Liverpool Football Club today announced that Ian Ayre is to step down as chief executive officer at the end of May 2017, when his current contract expires. (LiverpoolFC.com)

New dates for Liverpool’s Premier League fixtures against Everton and Chelsea have today been confirmed.

The second Merseyside derby of the season will now take place at 8pm BST on Wednesday April 20, at Anfield.

Meanwhile, the home meeting with Chelsea is set for an 8pm kick-off on Wednesday May 11. This fixture is subject to further change.

Robbie Fowler is working towards his Uefa Pro Licence in a bid to break into management. He told the Liverpool Echo:

“I’ve got the other coaching badges and now I’m doing the Pro Licence, which is the highest one you can do.

“I started it in January and it will take around a year. By next June I should have completed it. Everyone knows I want to be a manager. It’s what I have always longed for and I am almost there now.”

Liverpool face having to pay £120,000-a-week striker Christian Benteke, 25, to play elsewhere if they want to offload him this summer. (Daily Mirror)

West Ham are interested in signing Benteke but are unlikely to be be willing to offer the Belgium international more than £80,000 a week, meaning Liverpool may have to contribute towards his wages. (Times – subscription required)

Jürgen Klopp believes Liverpool have an “outstanding talent” in 19-year-old Brazilian midfielder Allan Rodrigues de Souza, who has had to be loaned to Belgian outfit Sint-Truidense because of work permit issues. (Liverpool Echo)

The Reds overwhelmed the visitors in the opening leg of the Europa League last-16 encounter, with the passion from the home crowd replicated in their performance on the pitch.

Asked whether he’d ever heard, seen or felt such animation from fans before, the Brazilian told Goal in an exclusive interview:

“No, it was the first time ever for me.

“When we came out for the warm-up, the supporters were already singing loudly and that was so motivating to the team.

“They helped us with their passion to get a positive result. The fans were really going for it and that pushed us to also go for it. It was an incredible experience.”

Sheyi Ojo has been included in England’s U19s squad for the elite round of the UEFA U19 European Championships. (LiverpoolFC.com) Ryan Kent is among the U20s group for their upcoming friendly.

Klopp revealed his love for rivalries and derbies developed from a young age:

I love derbies. Since I was six years old, when I really started thinking about football, I always loved to play games like this – against the next village, against best friends and things like this. Manchester United, it was clear before I came here, is a big game. Now I’m here and part of it – that’s really great. I’m enjoying this. It’s not easy but it’s possible and that’s pretty cool.

And of course in this season, if we can go through after two defeats in the league against United then it would be a little bit of payback if you want things like this. That’s what we wanted to do when we heard about the draw, that we could play again against United. Of course, you always have to think that you can go through and we thought it, we were not sure but we thought it and we saw the possibility – that was enough. Now we want to make the next step.

Jon Flanagan is expected to sign a new three year deal on Friday morning according to various reports.

“I don’t think players and people like Flanno grow on trees to be honest,” said Henderson last month.

“You have people like him and Stevie and Carra who have come through the academy and the fans feel as though they are one of them really, which they are.

“His whole family supports Liverpool. He has been a Liverpool supporter since he was a kid and he has had a difficult time for the last year, two years, but what I have seen him do behind the scenes is incredible really. (Express)

“It was brilliant what he did. It was the most unexpected thing you could do in a situation like that – it was a perfect goal.”

Manchester United and Liverpool being charged by Uefa after crowd trouble during the Europa League last-16 second leg.

Rival fans were seen fighting in the stands, seats were thrown from the Liverpool section into United’s and flares were lit at Thursday’s 1-1 draw, during which five men were arrested.

Both clubs have been charged with crowd disturbances and throwing of objects.

Liverpool, who won 3-1 on aggregate, have been charged with illicit chants and the setting off of fireworks.

The case will be heard by Uefa’s control, ethics and disciplinary body on 19 May, the day after the Europa League final in Basel.

United were not punished by Uefa after some of their fans sang offensive Hillsborough disaster chants during the first leg at Anfield. 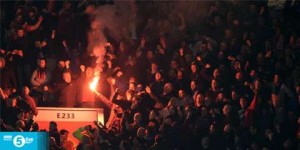 Liverpool are in advanced talks with defender Jon Flanagan, 23, over a new contract. (Talksport)

Chelsea striker Diego Costa, 27, will escape an FA biting charge but faces an extra game ban because he refused to leave the pitch when sent off against Everton in the FA Cup on Saturday. (Daily Mirror)

Everton’s new majority shareholder, Farhad Moshiri, believes he has bought into a family at Goodison Park and says he will “give them whatever I have”.(Liverpool Echo)

Manager Arsene Wenger has still got the full backing of the Arsenal board – and will get to decide when the time is right for him to leave. (Daily Mirror)

Wenger’s current contract runs until the end of next season but he has been shaken by growing unrest from Gunners fans and could consider leaving the club earlier than he wanted.(Daily Mail)

Ex-Arsenal captain Patrick Vieira believes the club’s fans have gone “too far” in their criticism of beleaguered boss Wenger. (Talksport)

Diego Costa is considering his future at Chelsea following his first dismissal in English football in the FA Cup defeat at Everton last weekend.(Daily Star)