Given each team’s injuries to senior players, it was unsurprising that both managers continued with their recent starting XIs.

For Liverpool it meant continuing with the lopsided 4-2-3-1, with Coutinho cutting infield off the left, Milner keeping a wider position on the right and Firmino just off Sturridge. The only real change was that for a second game in the row, Klopp preferred Lucas over Toure as Sakho’s partner at centre-back.

It was a similar case with Man City. For a third game in a row (with the exception of the understandable heavy rotation for the Chelsea FA Cup game) Pellegrini named the same line up. Similar to Klopp though, the Chilean manager made a surprising call in the previous game and stuck with it here, playing Fernandinho down the right of City’s 4-2-3-1 formation. 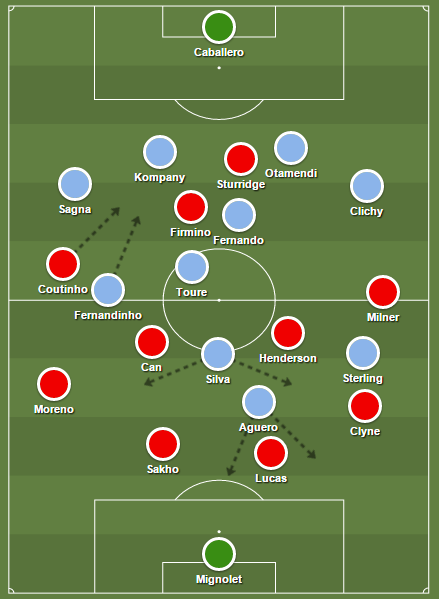 The tactical context before the game

The lack of options for rotation, without gambling with less senior players in the line-up, meant it was always likely that neither team would spring a selection surprise. The only ‘surprises’ – Lucas at centre-back, Fernandinho on the right – happened in the last game, so either team could at least consider and be fully aware of it.

When both teams are forced to name starting XIs that are easily to anticipated, the most intriguing aspect becomes how each manager will approach the game strategy and tactics-wise.  What’s more, this particular game had the added intrigue of how exactly Pellegrini planned to avoid being thrashed in the same way as in the league game back in November.

It was least highly possible – if not a certainty – that Klopp would ask his team to congest the midfield zone and press heavily to disrupt City’s passing rhythm in the same way as the Reds did at the Etihad. So the emphasis was clearly on Pellegrini to tweak his side and try something else regarding his side’s tactical approach.

Meanwhile, Liverpool were in the luxurious situation of having the initial tactical advantage of being in a position to dictate how the game would play out. They could keep the same approach as in the last game, safe in the knowledge they would have the upper hand if City didn’t change theirs. Alternatively, Klopp deciding to tweak his approach would have negated the potential benefit of Pellegrini doing the same as Liverpool would no longer be trying to press heavily, so any changes City applied to try and avoid being pressed would be made redundant.

A different scenario altogether would have been for either manager to adopt certain changes to try and stay ahead of the opposition only to end up weakening his team and become tactically vulnerable. Given the expected starting XIs, there were a few key tactical aspects for each team which could have turned out to be their major undoing.

For Liverpool – if Klopp was to go unchanged – the key areas were the space between the lines and the lack of a natural holding midfielder patrolling the zone where Silva thrives in running the show for his team. Additionally, the presence of Lucas at the back was always going to raise the red flag given Aguero and Sterling’s sheer pace and dribbling skills on top of Silva and Toure’s creativity to pick them out with lovely passes.

On the other hand, for City it was also easy to pinpoint two areas where they could easily lose the game. First, with Toure playing as the deepest midfielder with Fernandinho on the right flank (as in the mid-week clash at Kiev), there was always the possibility of the roaming Firmino and Coutinho, drifting infield off the flank, running riot ahead of City’s backline. Second, as a result of the first, with no-one patrolling the space between the lines, Otamendi and Kompany would both be prone to stepping out and trying to rectify the issue themselves, meaning they would leave space for Liverpool’s attackers – mainly Sturridge – to easily run in behind and latch on to well-timed through balls.

Klopp had a simple call to make when assessing how exactly to approach this game. He could have decided to either press heavily from the front and swarm forward with an attack-minded 4-2-3-1 (as at Aston Villa and against Augsburg), with the onus on free-flowing movement from all angles, incisive passing and sharp off-ball interplay in the final third. Or he may have preferred to be more cautious and tactically responsible from the start in a 4-1-4-1/4-3-2-1 formation focusing on closing off the space in the midfield zone and pushing City wide before attempting to press them from there and launching rapid counter-attacks into the space available in behind.

From a purely strategic point of view, it was logical to see the German opt against trying the same thing and hoping for the same outcome as in the last game against City. Plus, making changes would mean any tweaks Pellegrini was to make could be preempted and negated as a potential tactical advantage. Arguably, deviating from the plan used at the Etihad was the right call also because the City weaknesses which Liverpool exposed to make their pressing work so well weren’t going to be on display here this time, with Pellegrini welcoming back all the key players who were absent back then.

What Liverpool did was to approach the game in a much more passive and reserved way, keeping their formation closer to a rigid 4-4-1-1 (rather the fluid and lopsided 4-2-3-1), with players staying largely in their zones and focusing on denying the opposition space. Although the first dangerous situation in the game came as Moreno bombed forward on the left before putting a dangerous low cross into the box, it was noticeable how both he and Clyne largely remained in touch with the centre-backs and didn’t venture too far forward or get ahead of the ball too quickly.