The Week That Was – Friday 8th January

The Week That Was – Friday 8th January

Daniel Sturridge suffered a minor setback in training as he recovers from a hamstring injury. (BBC Sport)

Jurgen Klopp admitted he may be forced into the transfer market after the club’s injury problems worsened during their League Cup semi-final first-leg win at Stoke. (BBC Sport)

Philippe Coutinho and Dejan Lovren went off with hamstring injuries and Kolo Toure ended the 1-0 victory with what appeared to be a similar problem.

Klopp had previously said he would not buy new players in January.

But after Tuesday’s game he said: “This is something we have to think about.”

Liverpool have no fit central defenders as Lovren joined Martin Skrtel and Mamadou Sakho on the sidelines, while Toure was clearly struggling at full-time.

BBC Radio 5 live pundit Kevin Kilbane, who was at the Britannia Stadium, suggested Klopp’s methods might be responsible.

“I’ve seen it at some clubs before. Perhaps it’s down to the change in training methods. Under Jurgen Klopp they’ll train much harder day in, day out.

“The amount of medical attention footballers get at football clubs now – and also the physical work which is put in – this shouldn’t be happening. I put down the various hamstring injuries down to Klopp’s change in style.”

Klopp, though, pointed to the heavy demands made on Premier League players.

“Maybe I could look at our training methods but we don’t train – we only recover. There is no training,” he said.

Lucas Leiva believes Liverpool’s performance in last night’s 1-0 Capital One Cup semi-final first-leg win over Stoke City showed just how much he and his teammates want to reach Wembley. (LiverpoolFC.com)

“We got close last year in this cup and we want to win medals,” the Brazilian told Liverpoolfc.com

“Probably at the beginning of the tournament nobody talks about it, but from the first game in our minds we wanted to make the final and that’s the way we have been playing. We’re showing that we want to be there.” 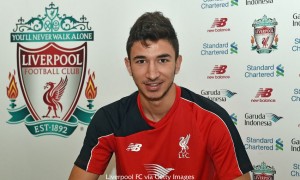 Liverpool confirmed the signing of 19-year-old Serbia midfielder Marko Grujic from Red Star Belgrade. He will now spend the remainder of the season back there on loan.

Grujic told Liverpoolfc.com: “I’m very excited and so proud to be here and a member of Liverpool Football Club. I can’t wait to get started, play at Anfield and train at Melwood.

“I was thinking about my progress in my next period and decided it was good for me to come here and try to be the best I can.

“I want to play in front of one of the loudest set of fans in Europe at Anfield.

“I also like the atmospheres at other stadiums, the crowds are very good. I like to play under pressure and that’s why I’ve come here – because it brings out the best in me.”