Neither manager made any selection surprises. Van Gaal fielded an unchanged starting XI, the only tweak being that Martial and Lingard swapped places down the flanks with the former now on the left and the latter back to the right (against Newcastle it was the other way around).

Klopp made one change to his line up but it was hugely influential, as it brought about several other changes to how Liverpool played. With Lucas coming in for Ibe from the previous striker-less 4-2-3-1 formation, the Reds were now in a striker-less 4-1-2-3; instead of having both the wide men high and narrow, here Lallana and Milner were deeper and narrower. 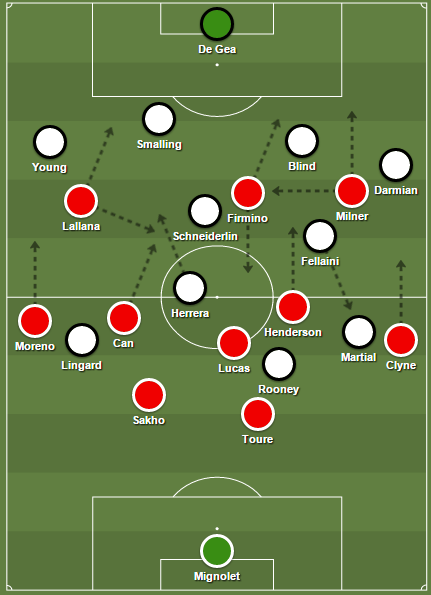 It was expected that Klopp’s Liverpool would quickly swarm forward and press ferociously as soon as out of possession, as the perfect antidote to this ponderous and possession-heavy United side. Less likely but still possible was for the German manager to opt to sit back and invite pressure, safe in the knowledge his side was defensively solid enough to be able to relatively easily soak up it up, given the opposition usually lack cutting edge, and wait for the appropriate situations to hit them hard on the break. Probable but highly unlikely was for Liverpool to go with the same approach as United and aim to match them as a way to beat them at their own game – usinge possession to reduce the game to only a few events, take the sting out of the game and wait patiently for the individual quality to eventually convert one of the many passing moves into goal-scoring chances.

What was fascinating regarding Liverpool’s exact game plan here was that instead of choosing one of the above possible approaches, Klopp ensured his side was perfectly capable of using each of them depending on the situation and what suited best.

Continuing with a striker-less formation heavy on midfielders and using so many energetic and hard-working players all over the pitch meant pressing the opposition was always going to feature in Liverpool’s strategy. With Lallana and Milner often occupying deeper and narrower positions, the formation was closer to the 4-3-2-1 that Klopp used in some of the previous games, specifically in two of the games where Liverpool pressed best (Tottenham and Man City away). As in these games, the formation made it possible for the team to pack the centre and deny the opposition breathing space in the midfield zone, enabling them to them press simultaneously through the middle or down the channels, by easily shifting across without leaving gaps centrally.

As ever – and contrary to the impression still prevailing in the media and among fans – Liverpool didn’t press like lunatics all over the pitch. Instead, they once again showed intelligence and good coordination, timing their pressing efforts only in certain situations and closer to the midfield zone after initially standing-off Man Utd’s back four and inviting them to step forward. 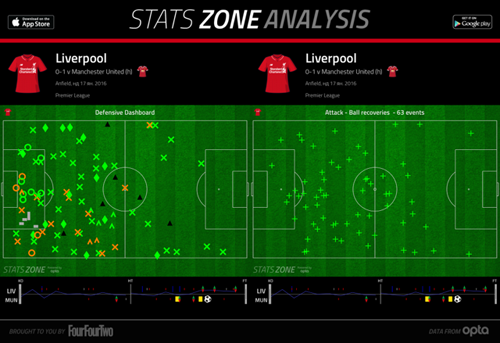 The inclusion of Lucas and going with what was essentially a 4-1-2-3-0 (or 4-6-0 for shorter) naturally resulted in Liverpool gaining extra defensive solidity. This was in contrast to the last two home games (Leicester, Arsenal) where Liverpool played only with the midfield pair of Henderson and Can allowed to both roam forward, with the wide midfielders being asked to stay high and wide  to further stretch the play and open up the pitch. But what Liverpool gained in attack they lost in ability to shield the centre-backs and patrol the space between the lines (more evident in the Arsenal game).

Here, having a natural holding midfielder who specialises in anchoring the midfield zone and assisting the centre-backs meant Liverpool were well equipped to repeal Man Utd’s attacks, making it even less likely for the visitors’ possession play to offer any kind of threat. 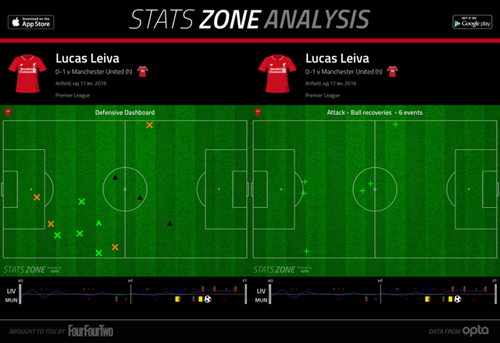 The home side was often defending with all ten outfield players behind the ball in a very tight and nicely compacted 4-3-2-1 that totally compressed the space for Man Utd, making it almost impossible for the visitors to develop any dangerous passing moves, let alone genuine goal-scoring opportunities. Liverpool’s nice distribution of their players in all zones as well as being able to pack the centre also allowed them to quickly recover their defensive shape and transition back to stop several potential Man Utd breakaways following some cheap concession of possession. It hinted at Klopp constructing his side to mitigate for this potential pitfall and guard against gifting easy counter-attacking opportunities to the opposition.

Liverpool’s 4-6-0 formation using two layers of three midfielders meant they were able to outnumber and rival, if not outright dominate, Man Utd for overall control and possession. The key here was that having Lallana and Milner occupying central positions and Firmino playing as a proper false 9 (coming deeper into midfield positions to link up the play and participate in the build-up phase), the Reds basically played with six midfielders against the opposition’s three. As a result there was plenty of passing angles to ensure smooth build-up play and sustain long periods of ball retention, making it harder for the visitors to press efficiently (which they are usually very good at). 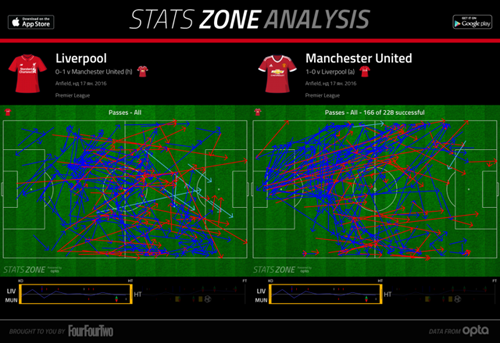 Klopp’s team also impressed with their smart positional play going forward. The good distribution of their players across the pitch meant the team could also quickly transition and spread out dangerously in attack. The way the Reds tried to either break forward or morph their possession play into penetrative attacking moves was impressive, showing very good coordination and complimentary roaming movement to compensate for the lack of outright pace.

Klopp Given the Smallest Liverpool Squad Ever?