Given both teams’ injury issues it was only natural to see neither manager springing any surprises with their starting XI or formation.

Klopp went with a striker-less 4-2-3-1 that saw Milner and Ibe on the flanks with Lallana just off the most advanced attacker Firmino. Wenger continued with the exact same personnel that played the majority of the games in the past month and a half. 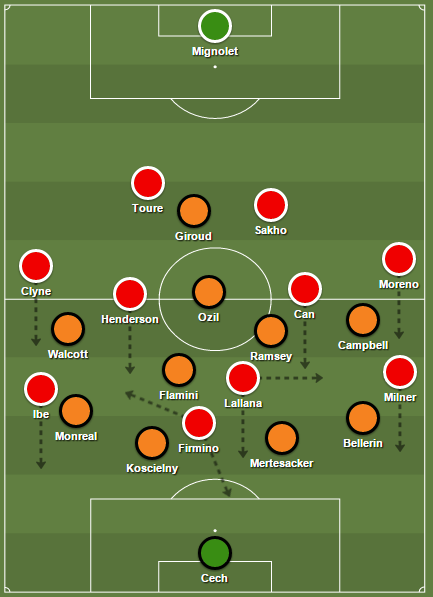 We’ve already become accustomed to see the Arsenal of the past couple of seasons not chase possession supremacy in every game as dogmatically as before. Instead, and especially in such big games, the team often sacrifices possession for greater defensive resilience and opportunities to catch the opposition off guard on the break.  All this is part of the newfound tactical versatility and pragmatism Wenger suddenly started to show since the start of last season.

That’s why it’s wasn’t really a big surprise to see Arsenal starting this game as cautiously as they did; with obvious disinterest regarding possession levels. Clearly Wenger anticipated Liverpool would be making a quick and aggressive start so he wanted his team to first of all weather the storm and build from there.

The French manager tried to achieve this by telling his whole side not to overplay it, especially at the back, with the obvious emphasis towards direct balls forward (for Giroud or the wingers sprinting down the flanks) designed to prevent being closed down by Liverpool and eventually losing possession in crucial areas. Additionally, instead of seeing Arsenal’s players looking to quickly spread out in attack with the full-backs flying forward and the wide men tucking infield, there was considerable positional discipline and visible rigidity.

The whole of the Arsenal side played deeper than usual with the full-backs staying home and closer to the centre-backs with Walcott and Campbell doing a good covering job down the flanks as the de-facto wide defenders. Up front, as is often the case when the Gunners adopt such a reactive approach, Ozil got closer to Giroud and tried to form a two-man wall whose job was to try and make it harder for the opposition’s defenders to either recycle possession freely or play easy passes towards the midfield zone. The visitors defended in a typical deep and narrow two banks of four, with only the front four making sporadic pressing attempts from a bit higher up the pitch and this only whenever the ball spent a bit more time being played across Liverpool’s back four. 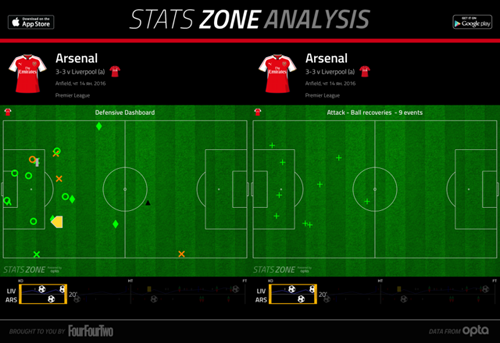 However, as much as Arsenal deliberately made a rather passive start to the game, the way Liverpool’s stormed their way forward following kick off totally set the visitors on the back foot.

Although Liverpool closed down with good intensity and urgency, as per usual they weren’t really pressing heavily from deep into the Arsenal half. Instead, as is often the case, the team generally stood off when the ball was among the opposition’s back four but quickly sprung into life whenever it was played into the midfield zone (be it down the flanks or through the middle).

The Week That Was - Friday 15th January