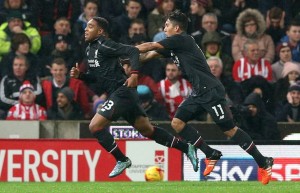 A place in the Capital One Cup final at Wembley Stadium awaits the victors of Tuesday night’s semi-final second leg at Anfield, with Liverpool taking a 1-0 lead into the match against Stoke; 7.45pm kick off UK time. Jordan Ibe struck a 37th minute winner in the first leg at the Britannia Stadium, after coming on for Coutinho after just 18 mins. Both Coutinho and Lovren went off injured in the first half of that match on January 5 and neither have featured since.

Liverpool will need to defend far better than they did against Norwich on Saturday if they hope to reach their first cup final since 2012. The Reds may have finally found their scoring boots with their tally against the Canaries equalling the numbert of goals they scored in their six previous Premier League games. Stoke suffered a 0-3 defeat against Leicester on Saturday, their heaviest loss of the season to date, and have failed to score in their last two matches.