The Week That Was – Friday 11th December

The Week That Was – Friday 11th December

Jurgen Klopp has revealed he received a message of congratulations from former Manchester United boss Sir Alex Ferguson after his impressive start to life at Anfield. (Liverpool Echo)

“I’m worried about him because the one thing United don’t want is Liverpool to get above us,” said Ferguson, whose former club have 20 league titles, compared with Liverpool’s 18. “I know him quite well from the coaching seminars. He’s going to make a difference at that club with his personality, drive and knowledge. Things are looking up there.”

After the defeat at Newcastle, Klopp said:

“We were not really in the game. We were not aggressive enough or close enough. There were good moments for pressing but we didn’t do it”.

Liverpool lacked their usual intensity in Sunday’s 2-0 defeat at Newcastle because Jurgen Klopp did not pick a team that could implement his game plan. … The Magpies were the first team to run further and make more sprints than Liverpool in a Premier League game since Klopp took charge, but matching the Reds’ work-rate was not the only reason they won. … It will probably be about eight to 12 months, and at least a couple of transfer windows, before he really puts a stamp on this team. I was talking to a number of Liverpool fans before the Newcastle game and their feelings seem to change all the time about what they can achieve this season – one week they are a work in progress, the next they are back in the big time. It is too soon to get carried away. There have been some really encouraging signs and glimpses of what Klopp is capable of but there have also been blips – like Sunday – where you are reminded he is only two months into the job.

Former Liverpool midfielder Igor Biscan has been found guilty of attacking a taxi driver in his hometown of Zagreb, Croatia by butting him in the face. (Liverpool Echo)

Liverpool were drawn away against Exeter City in the FA Cup 3rd round.

Dejan Lovren has promised the best is yet to come from Liverpool under Jürgen Klopp, insisting time at Melwood is key to making incremental improvements as the season progresses. (LiverpoolFC.com)

“We have only been working with him a short time, barely two months, and we have already had some good results with him,” he told the latest edition of the official Liverpool FC magazine. “With time it will be better. With his methods and his way of working, I don’t see how it cannot be better. “We will know him more and he will know us more and he will also have a better understanding of the league and the club. “He knows the expectations at Liverpool. Everyone knows it is a tough job, but we are here to do that job.”

Daniel Sturridge will be out for several weeks after suffering a hamstring injury during Sunday’s defeat by Newcastle. (BBC Sport)

He felt a problem after coming on as a second-half substitute at St James’ Park and a scan showed a strain.

Former Liverpool striker John Aldridge says it was “unacceptable” that forward Roberto Firmino pulled out of a challenge during Sunday’s loss at Newcastle. (Liverpool Echo)

Ryan Fulton and Connor Randall have both today signed new contracts with the club at Melwood. (LiverpoolFC.com)

Jurgen Klopp and Dejan Lovren have both been nominated for Premier League Manager and Player of the Month Awards respectively.

Klopp has been named on a four-man shortlist for the division’s Manager of the Month honour – alongside Claudio Ranieri, Roberto Martinez and Mauricio Pochettino.

Lovren, meanwhile, is one of six candidates for the Player of the Month prize, withRoss Barkley, Troy Deeney, Harry Kane, Romelu Lukaku and Jamie Vardy his competition. 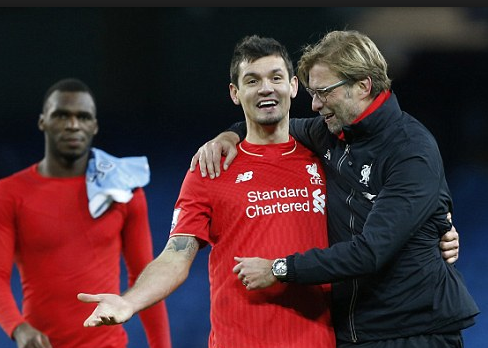 Liverpool put in a professional, yet uninspiring, performance away at Sion in the Europa League last night, to secure top spot in the group. Here’s the ‘highlights’ of the nil-nil:

Manchester United boss Louis van Gaal, 64, is set to be handed £200m to spend next summer. And the Red Devils will buy at least one of the world’s top players, drawing up a wish-list that includes Real Madrid duo Cristiano Ronaldo and Gareth Bale and Barcelona’s Neymar. (Sunday Mirror)

Chelsea could sack Jose Mourinho whether or not they beat Porto in the Champions League on Wednesday. (Daily Mirror)

If Swansea City decide to sack manager Gary Monk, they could turn to former manager Brendan Rodgers, who has been out of work since his October departure from Liverpool.

Manchester United will start their search for Van Gaal’s successor at the end of the season if, as expected, the Dutchman confirms he will retire at the end of his contract in 18 months. (Daily Telegraph)

Bayern Munich boss Pep Guardiola could be prepared to take a 12-month break from football to make sure he lands the Manchester United job.

Crystal Palace chairman Steve Parish says the Eagles – who are set for American investment – can win the Premier League in the next 10 years.

Tottenham’s plans to build a new 61,000-capacity stadium have been described as “an act of pure vandalism” because of the planned demolition of three Victorian and Edwardian heritage buildings. (Evening Standard)

Being charged by the FA is the same as being banned by the FA, we know that don’t we?