With neither manager making any surprising tactical or selection calls, this was a game of little quality and minimal tactical interest.

For Liverpool, Klopp started with what looked a heavily attack-minded selection. But in reality, with all these players being fit, there was little in terms of players fighting for the same spot or the manager having genuine selection dilemmas. Previously, Lucas was being seen as a sure starter, but having gone off the boil lately and with both Henderson and Can fit, it’s hard to see him starting games where Liverpool expect to dominate and need to win, unless Klopp decides on a 4-1-2-3 formation and benches one of Coutinho, Firmino and Lallana – which is hard to imagine in those circumstances.

Arguably, the only decision approaching close to a surprise was that Benteke was left on the bench once again. This is not to suggest his form inarguably deserves a start, but mainly because of the reported ‘heart-to-heart’ chat between him and Klopp – often, after such positive discussions the player is given an extended run of games to see if he can really deliver the goods.

For Leicester, the case was even simpler. Huth, coming back from suspension, was always going to go straight back into the starting XI. With Ranieri deciding not to risk Drinkwater, the recent Kante-King midfield pair was also going to stay, more so with the Italian manager seemingly not trusting the former Napoli captain Inler for whatever reason. Everyone else was as usual, with Okazaki continuing to be preferred to Ulloa alongside Vardy up front. 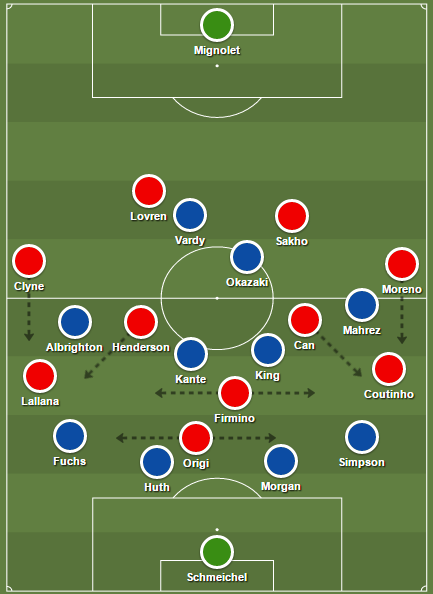 Despite it being far from flat or non-eventful, the game lacked quality. Both teams had extended periods of overall dominance – Liverpool before the goal, Leicester after it – but neither managed to convert this into anything. Both teams largely flattered to deceive, with the overall efforts and running of both teams camouflaging their technical and tactical deficiencies.

The above, combined with the zero tactical progression shown throughout the game makes it hard to analyse from a tactical point of view. As such, what follows is an attempt to summarise how the game transpired by providing an overview of each team’s rudimentary tactical approach.