Liverpool head in to the Boxing Day clash with league leaders Leicester City at Anfield on Saturday – 3pm kick off UK time – on the back of four games without a win. The Reds’ last victory was the 1-0 win over Swansea at Anfield, which was followed by a 0-2 defeat at Newcastle, the 0-0 draw with Sion in Switzerland, the 2-2 draw with West Brom at Anfield, and last Sunday’s 0-3 defeat at Watford. 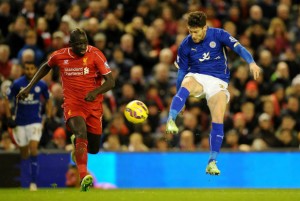 Leicester meanwhile are sitting pretty at the top of the Premier League, two points clear of second place Arsenal and 14 clear of Liverpool who sit in 9th with 24 points. The Foxes continue to defy the odds in outperforming richer and more illustrious teams with their consistency and attacking brand of football. This is a team who exactly 12 months ago were bottom of the Premier League with 10 points from 17 games and a goal difference 0f -14. (Liverpool by the way were in 10th with 22 points from their 17 games and a goal difference of -3)

Claudio Ranieri was widely mocked when Leicester announced his appointment in July but he has since led his team to the summit of English football, with a 2-5 home defeat to Arsenal the only blemish in what is turning into an astonishing season for the Foxes. Since that defeat against the Gunners, Leicester have picked up 26 points from a possible 30, scoring 22 and conceding 10. They’ve scored the most goals (37) overall and away from home (21), won the joint most (11), lost the fewest (one) and have the best away record in the division having won six and drawn three of their nine away games prior to the Boxing Day trip to Anfield. They have not yet failed to score in any League game this season.

The Week That Was - Thursday 24th December