The word ‘dysfunctional’ has been used by many observers when it comes to the way Liverpool FC operates, particularly in the transfer market.

FSG have come in for some criticism lately, in terms of how they’re running the club. One piece of logic I don’t quite get is that in trying to qualify for the Champions League and rebuild Anfield they are simply looking to make the club more sellable; while that may be true (I don’t know what FSG intend to do), that’s also exactly the same process as trying to build the club up to a level the fans crave. (It’s a bit like saying that someone taking their car for a service and getting new tyres fitted is therefore clearly looking to sell it.) If they weren’t looking to qualify for the Champions League, and if they weren’t increasing the capacity at Anfield, then that would be cause to worry.

However, this doesn’t mean that everyone at the club is singing from the same hymn sheet. From the outside there does indeed seem to be a certain amount of dysfunction, but like anyone else I’m mostly guessing at what’s going on, and relying on scraps of information from those journalists who seem most ‘in the know’.

Pretty much all of the apparent dysfunction seems to centre around the club’s transfer policy, and it’s controversial committee. 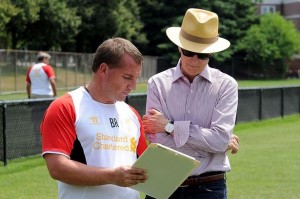