I am currently exercised by how much power Emre Can has. It’s a less opaque conceit than it sounds, it’s more a Speed x Strength type of thing than an exertion of will. My dad, a maths teacher, would beguile over how our travel chess game could predict it was going to checkmate you like seven moves out – “the number of possibilities must be in the billions”. Well I feel as mystified about the seemingly infinite possibilities of a Liverpool line up just now. These are heady days, the players are in, but the team has only played once. It doesn’t do much for your mental health. I find myself in dark corners writing lists on scraps of paper over and over, like an unsectioned malcontent. So it’s in this funk that in a fleeting minute of anxiety I find myself unduly concerned with Emre Can’s ability to Hold the Midfield. 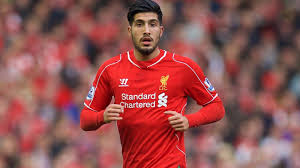 To give Power as a physical concept its full airing, it is both simple – speed x strength (or maximum output) – and also complex – benching your maximum weight and throwing a tennis ball as far as you can are both maximal, therefore use Power, but one is slow, and the other requires no traditional Strength. I like to use the idea of Spring Vs Cadence.

Let’s take Usain Bolt. It’s not the cadence of his leg turnover that make him a phenomenon, it’s the nature of his contact with the fall. Where we may have a contact time of a third of a second, his would perhaps be a sixth of a second. And from, or more accurately because of that heightened contact, the distance produced by this spring is so much further than one produced by a mere mortal. In short, the man has legs like a tightly coiled spring, ours are probably closer to fusilli. This is Power. Plyometrics. Explosion.