A.F.C. Bournemouth are the first visitors to Anfield of the 2015/16 season – 8pm kick off UK time on Monday – with this fixture marking the first ever league meeting between the two clubs, all six previous meetings having come in either the FA Cup or League Cup. The Cherries have visited Anfield on two previous occasions – both being FA Cup 3rd round replays in January 1968 and January 1927 – with the Reds winning both games 4-1. 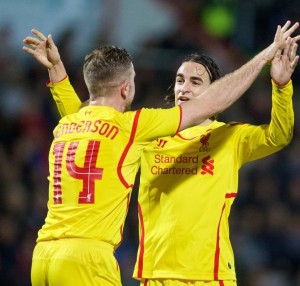 The sides did meet twice during the calendar year 2014, with Liverpool eliminating Bournemouth from the fourth round of the FA Cup winning 2-0 at Dean Court in January before again travelling to Bournemouth for a fifth round League Cup tie in December which the Reds won 3-1.

The Cherries sealed their first ever promotion to England’s top tier by winning the Championship title on the last day of the 2014/15 season courtesy of a 3-0 win at Charlton Athletic (amassing 98 league goals en-route to the title), ending the season with 90 points, one more than second place Watford. They kicked off their first campaign in the Premier League with a 0-1 home defeat to Aston Villa going down to a second half header from Rudy Gestede.