Agenda: last season, this summer and the future. 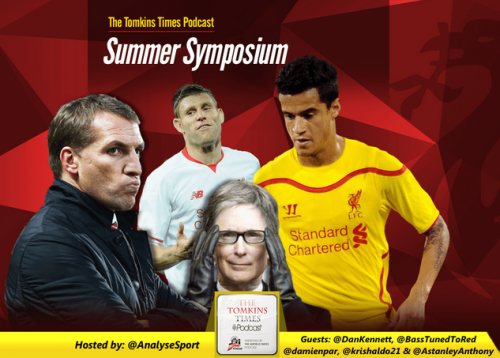 Brief notes on the answers included in the edited podcast.

Losing out on Sanchez was crucial, and not signing anyone remotely like Suarez, was the reason the season was so disappointing. Cock-a-hoop Arsenal fans, comparing Lambert to Sanchez; and the Reds not making the big signing that was required.

Looking at the underlying stats from last season: shots for, against, shots on target, shot ratio and why fifth place was probably a fair reflection, unless you start digging even deeper. Terrible shot conversion rate, especially when considering the quality of chances, and why the proportion of attempts we had from outside the area cost Liverpool the most. Coutinho attempted 67 shots from outside the 18 yard box, with only two goals (compared to Eriksen with six). This trend continued throughout the squad, except for Sterling.

Two failures in particular: if you consider the Reds to be a rocket, then they were lacking two vital cogs -the midfielders and strikers – who completely failed to ignite the team. Do, or did, we as fans over-rate the ability of our midfield to create good quality chances for our striking personnel?

Too much change over the previous summer, so some regression is expected, but virtually everything that could go wrong, did. Too much sterile possession around the edge of the penalty area, with no real incision or penetration. Listing the big chances across the top  of the league, and how the Reds compared.

It wasn’t an absolute car crash, and the biggest disappointment stemmed from not winning the league, and then falling away so badly. The wheels fell off after the defeat at Anfield against Manchester United, after clawing ourselves back into contention.

Two thirds of the league season, in terms of performances, was garbage. The biggest disappointment was the wasted opportunity of keeping our foot on the throat of Man Utd; especially considering how their performance was also poor, and we failed to capitalise. We need the CL revenue far more than Utd and Arsenal, just to try to close the financial gap. The season wasn’t a failure empirically, but when you consider expectations, it leads to a huge feeling of frustration and disappointment.

The Causes of the Last Season’s Disappointment?

Nothing functioned to an acceptable level, and although I like Rodgers, he was probably the most culpable: he trains, he decides the tactics and the strategies, he also motivates.  If the manager fails to fire, then the whole system will fail; and not firing means falling out of the Champions League, and losing vast revenue. They took a chance on Sturridge’s fitness, and it backfired spectacularly. Rodgers has to hold his hands up, admit his mistakes and learn from them.

Can Rodgers and the team cope with the pressure of big games? When the pressure builds, we seem to capitulate; or at least last season anyway. Furthermore, although the piece by Dion Fanning was a hatchet job to an extent, some of the points he made did ring true. Some experience in the coaching staff might help with that, as well as in the new signings. Rodgers’ lack of tactical nous in European competition, including the need to react in matches and change to deal with the opposition’s strengths.

We had a system, and then got players that didn’t fit that system; then we kept evolving until the end of the season and the apparent lack of a system. Can we learn anything from other managers and how they have a set system and just tweak within games? Does bringing in Balotelli cause too much upheaval in the system when they come into replace Sturridge? The high pressing system will never work when you’ve got players like Mario and Lambert playing up front. Have we even got a philosophy at the moment, and what should it be? Rodgers managed to turn it around last season, and then really struggled to adapt and change, and did the players stop believing in him?

Looking some stats for the signings we’d made at the time of recording: Milner, Ings and Bogdan. Interestingly, against Liverpool, their new back up goalkeeper made nine saves, which is the same as De Gea at Old Trafford when he won the man of the match award. However, his sample is too small to draw any conclusions as yet. Ings seems to suit a Rodgers team, good at winning the ball high up the pitch, good at dribbling compared to Sturridge in 13/14. Although his shooting accuracy is a concern over the past two seasons. One to use, like Origi, for the Europa League and cup matches.

The main target should be Lacazette, but what about if it is Benteke? It would work if we play with a diamond, and use two strikers. People need to realise he is nothing like Andy Carroll. If the signings are only Ings, Milner and Benteke it would represent a lack of imagination from the transfer committee.

At the point when this recorded, it was so difficult to work out what was going on at Liverpool, because they were so leak proof. The radio silence was deafening. There was no need to make a statement backing Rodgers because that would making a statement about nothing happening, because he is already the manager. Why the length of Milner’s contract is the key factor when assessing his signing, on a free transfer, but with high wages. It would be a bit of coup if only three years, but anything more might become more of a concern. Milner certainly has the durability to play consistently in central midfield. All the new signings also have outstanding injury records, and that this element of transfer analysis was a major factor when Comolli was in charge. It would be ideal if Rodgers became the head coach and removed his weakness in identifying players but focus on his coaching ability. The manner of the Firmino deal indicates at a new approach when signing players, and the lack of fanfare and rumours that preceded the announcement.

All targets for the season will be season-long, even though there will be probably be five to ten game rolling targets as well; especially if we have a good transfer window, and only manage 15 points from the first ten games. The only caveat to that scenario would be if the performances are superb, with plenty of quality of chances being created, then he might last a lot longer.

Will Rodgers still be the Liverpool manager on the 1st January 2016? Yes. Because of the difficulty of the fixtures, it might give him a reprieve of sorts if they can manage to pick up one or two results in the series of difficult away matches.  There will be a points target, but after the release of the fixtures, his target may have been reduced. However, as Mark said, the performances need to be there.

You’ll have to listen to find out these answers!