“He is a very good young player but he has not yet hit the heights of an Owen, Rooney, Fowler or Giggs at this stage of his career,” he said on Kicca.

And another former player, striker John Aldridge, believes the Reds are better off without Manchester City-bound Sterling and that £49m is overpriced for the England forward. (Skysports)

A change in club policy that many have already observed? Brendan Rodgers at his first news conference in Bangkok:

“Transfers is not really something I want to go into in a press conference. I spent a lot of last season talking about transfers and don’t intend to this year. Any business done will be done behind the scenes at the club.” 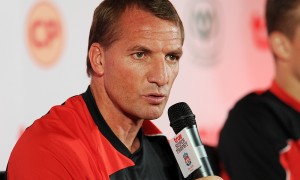 Rodgers also spoke about Thailand and the new coaching staff appointments. The full interview is here on LiverpoolFC.com.

Beefing Up and Bullying: Benteke To LFC