Roberto Firmino – Much Cheaper Than You Think

Roberto Firmino – Much Cheaper Than You Think

Transfer prices increase all the time, not least when Sky suddenly pump billions more into the game (which viewers then have to stump up for). The idea that Roberto Firmino is Liverpool’s 2nd-most expensive player ever, whilst technically true, ignores the massive impact of inflation.

When inflation is taken into account, he ranks only 10th out of the club’s signings over the past two and a half decades, and that’s with the assumption that the full £29m will be paid; if it ends up being just the initial £21m, then he wouldn’t even feature in the top 20.

With this in mind I thought I’d share the list of the club’s most expensive Premier League-era signings, after our Transfer Price Index (TPI) inflation has been added.

Since 1993, prices have risen almost exactly ten-fold. So someone costing £2m in 1993 would cost £20m now – although until we’ve calculated “2015 money”, this is in “2014 money”. With the new TV deal in place, prices will surely rise yet again. (Edit: just to explain, inflation is not steady, year on year, and between 2008 and 2012 there were dips in the average transfer price – presumably relating to the global economic crash and the implementation of FFP. However, prices are rocketing again, with the latest Sky TV deal.)

Also, I’ve included the Reds’ biggest pre-Premier League signings, going back to to start of the ‘90s – so although Dean Saunders now appears to be £29m, his fee may actually be even more, given that the £2.9m only started accruing inflation in 1992/93 (for TPI we haven’t calculated inflation going back beyond 1992/93, due to the amount of work involved, but it may happen one day). 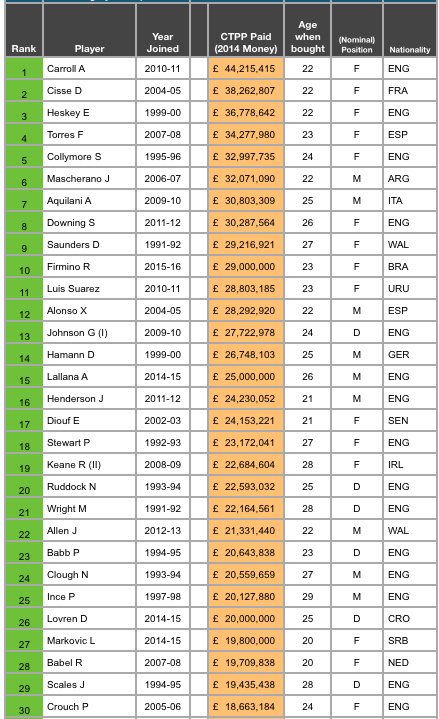 What’s clear is that, yet again, paying a lot of money for a player is no guarantee of success (see Tomkins Law for 40% of transfers clearly succeeding, and with only around 10% being ultra-successful – with these figures based on over 3,000 Premier League transfers between 1994 and 2014).

In purely subjective terms – judging whether the signings would be rated as very successful by the masses – then only six of the 30 (or 29, given that Firmino hasn’t even played yet) would fit that category. That’s 21%.

I’d say that five of them (17%) fit into the (subjectively) exceptional category, with Jordan Henderson not quite there yet (but making good progress). But exceptional signings have to represent exceptional value for money, and that’s where my TPI Coefficient comes in.

My figure of 40-50% for the success of a signing relates to the output of the coefficient, which takes into account the fee paid, any fee recouped (both adjusted for inflation), as well as the number of league starts made (with the frequency of those starts also taken into account). If a big sum is paid, then that needs recouping in some way or other: either by playing games (i.e. being good) or from a sell-on fee. Ideally the signing plays tons of games (i.e. he’s good) and then is sold for a big fee, usually just before his legs give out (see Patrick Vieira at Arsenal).

Running Liverpool’s top 30 most expensive deals through the TPI Coefficient, only three signings – the 10% I’d expect – are rated as exceptional by this non-subjective measure. Remember, these are rating the transfers, and not necessarily the players themselves (although they obviously form a big part of the equation). The three exceptional deals are Luis Suarez, Fernando Torres and Xabi Alonso. Indeed, they are miles ahead of any other Liverpool signings that cost over £18m in 2014 money.

They score particularly highly because they started a high percentage of games while at the club, and were all sold for big profits. These are the perfect deals, even if fans might not have wanted them sold at the time.

By contrast, Didi Hamann, who cost a lot of money, scores highly on the number of games played, but left for peanuts at the age of 33; so he rates as a success, but a qualified success, given the financial disparity between his purchase and sale fee.

Stan Collymore cost a lot of money, played well in fits and starts, and then was sold for more-or-less what he cost; Aston Villa getting the Reds out of a jam. Mark Wright completes the list of seven (of the 29 in question) who score above average in the TPI Coefficient. In his case he seemed to struggle for years, but hung around just long enough to finally look like the player fans hoped they were getting in 1991, with an impressive renaissance c.1995/96.

Next there follows six signings who score better than neutral, but below the overall 3,000-player TPIC average. These are Phil Babb (I’m not quite sure how he started 124 Premier League games), Glen Johnson, Peter Crouch, John Scales, Neil Ruddock and Emile Heskey. That makes for 44% of the signings who work out as “in credit” on the coefficient, albeit some by the skin of their teeth.

Every signing that costs a fee starts off in negative equity, with the number of games required to pay off that debt relative to the price of the transfer. It’s worth remembering that out of 3,000+ signings in the era in question, the average number of league starts is just 40 by the time they leave the club.

The 16 in negative equity on the coefficient include Joe Allen and Jordan Henderson – although when the performance data from last season is added, Henderson will move into credit; plus he has a lot of time on his side to more than “pay off” the £24.2m fee (TPI). Allen is gradually moving towards a neutral rating.

Then come Adam Lallana, Lazar Markovic and Dejan Lovren, who haven’t been at the club long enough to accrue sufficient match data, but have a fair way to go to pay off reasonably hefty fees. Right now it’s looking particularly unlikely that Lovren will manage to do so, while Lallana will need to start 150 Premier League games to become an above average signing, or 103 starts to move out of negative equity. (Of course, he could end up being like Luis Garcia, who didn’t play a high percentage of games, but could be subjectively labelled a success due to the number of important goals he scored.)

When those in negative equity are looked at subjectively, only Henderson looks out of place, and as noted, he will be quite a lot higher once the data gets updated. And given that 11 of the 16 have already left the club, they can be labelled as clear TPIC flops; most would be labelled subjective flops too.

These 29/30 players were signed by a whole host of managers, including two of the club’s best-ever players (who surely should know how to “spot” a player), one of whom also won four league titles as a manager; a former ‘bootroom boy’ who worked under the greats; a Frenchman who won the Reds a unique treble three years after having a role in France winning the World Cup; an über-successful Spaniard who ended the club’s 21-year wait for a European Cup; and the young boss who won the highest percentage of league games managed by the club in the modern era. On top of this, there was input from a Director of Football (who, for all his faults, signed several world-class players for Spurs and Liverpool), umpteen scouts and a transfer committee. Such a wealth of knowledge, yet Hits and Misses seem to happen at the usual rate.

Further analysis of this data is for subscribers only. 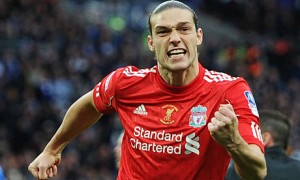 The Week That Was – Friday 26th June