Why Aren’t We Scoring More?

Why Aren’t We Scoring More?

There has been some recent talk about Liverpool’s lack of goal scoring chances. In Andrew Beasley’s blog Brendan Rodgers’ Goalscoring Low, he highlights some stats of our goal scoring woes. He goes into more detail, but essentially, if you take a running total of 38 games under Rodgers, our goals scored and goal difference is at the lowest of any point of his tenure.

The following is from Andrew’s blog:

Goals win games and get you more points than anything else. In the days of two points for a win, a clean sheet was 50% as valuable as a win. Now that figure is 33%. So whilst clean sheets are useful, they aren’t as useful as goals. And goals give you a better goal difference which strongly correlates to points, as shown by the article; The relationship between points and goal difference, where the following table is sourced from showing the ten year relationship in the Premier League: 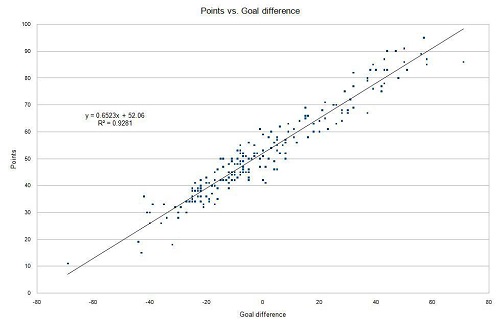 If we now look at our current goalscoring record compared to our opposition as well as save ratios from Dan Kennett’s dashboard (I promise, I have done some of my own work too!), we might possibly see why we are at the lowest point in terms of goal difference under Rodgers (red line for LFC and blue for opposition):

The Week That Was – Friday 10th April