With both teams missing so many players, the starting XIs were largely unsurprising – yet both managers did manage to spring a couple of surprises in how exactly they lined-up.

With Sturridge once again missing through injury, Rodgers decided to give Coutinho a go up front. The Brazilian was utilised as a false 9, with Sterling and Ibe flanking him in the 4-1-2-3 system the Reds’ manager persisted with. The other decision of interest was that for the first time Rodgers played Emre Can as a centre-back but in a pair – the German partnered Lovren with Toure remaining on the bench.

On the other side, the visitors kept their usual 4-2-3-1 formation. But Carver also made a couple of surprising decisions. Recently, Colback was used at left-back following the absence of both Haidara and Dummett (Newcastle’s two senior left-backs). But here the former Sunderland player was moved back in midfield, with Anita given a go at full-back (a position he often played at Ajax). Another surprising decision was to see none of Gouffran, Ameobi or Jonas Gutierrez starting down the flanks. Carver stuck to his word to make sweeping changes with all three of them benched and Obertan given a rare start on the right with – surprisingly – Cabella used down the left. 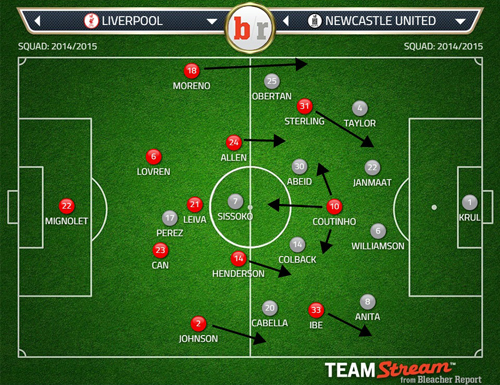 This was another game where Liverpool’s opening to a game was rather poor. There was no sign of the expected early ‘home push’ as the team couldn’t sustain any early pressure on their opponent to successfully pin them back. Nor did the home team manage to apply any good pressing rhythm as once again there were only sporadic individual efforts from the front players on their own to close down whoever out of Newcastle’s back four had the ball.

As such, although the Reds visibly tried to pass the ball quickly and attack swiftly with direct balls hit towards the front players, their flow too often broke down easily and the players couldn’t really conjure any decent passing combinations. This in turn gave Newcastle the chance to settle rather comfortably into the game and eventually, after regaining possession, try to construct some attacks of their own.

The main difference though, compared to Liverpool’s last two league games, was that here the opposition didn’t really put them under any pressure to try and destabilise the Reds’ build-up process from the back. That’s why the home side had good possession in deep areas, but they couldn’t morph it into something dangerous higher up as often their attempts to attack directly didn’t materialise. The players appeared too eager to provide the final pass and quickly send someone in behind, even if the opposition was well set in their defensive shape and there was simply no-one in a good position making the incisive off-ball run. 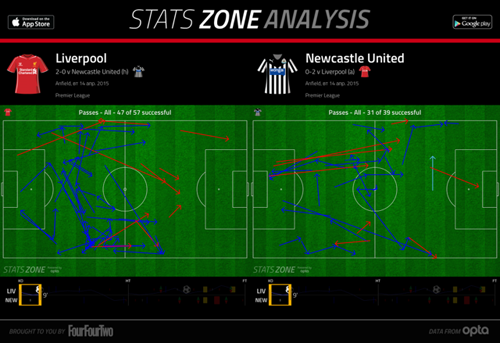 ... but improving after going a goal up

Goals change games and give confidence though, while having a negative effect on the opposition. After their early struggles, Liverpool’s direct route paid dividends. After regaining the ball in the middle third, the team had the chance to break forward dangerously, when Henderson’s sublime switch of play from deep inside-right position found Sterling in the left channel. From there the forward quickly cut infield and using his dribbling skills opened himself a good shooting position to curl the ball into the far corner to put Liverpool ahead.

The goal clearly had a positive impact on Liverpool, inspiring them to suddenly click into gear and play with confidence and swagger. Of course it had the opposite effect on Newcastle – their initial comfort and rather surprising calmness was replaced with nervousness among their defensive ranks. The home side remained committed to pass swiftly and try to swarm forward as soon as they were in possession but now, in contrast to before, they displayed a much better efficiency at what they were trying to achieve. Soon after, the whole 4-1-2-3 set up with a false 9 up front started to pay dividends with clear patterns of play recognisable.