Following their good display at Palace – which yielded them their first win in seven games – and given some key absentees, Hull remained unchanged for this game. Bruce once again kept faith with his 3-1-4-2 shape.

For Liverpool, Rodgers too kept the same team that drew blank against WBA with Allen coming in for the missing Gerrard. The shape remained the introduced at the weekend asymmetrical 4-1-2-3 with Can again asked to perform the role of the false full-back. 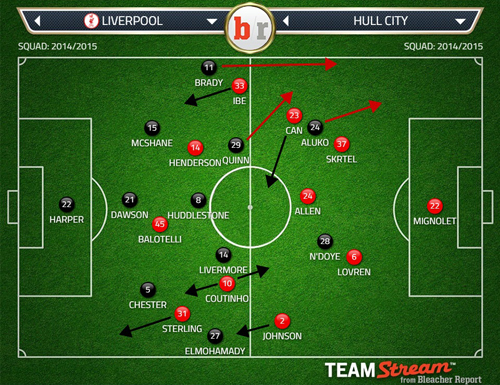 On paper any back three formation will struggle to cope with a 4-1-2-3 or 4-2-3-1 formation defensively. This is because of the easily achieved wide overload which will continually threaten to either drag the side centre-backs wider, leaving gaps for runners to exploit through the middle, or see the inside channels exploited by the wide forwards.

Here however, with Liverpool’s attacking threat so limited and their structure unable to pose that dual danger (more on this later), Hull’s 5-3-2 defensive shape proved extremely useful to deal with the opposition as the central congestion of six players created a very disciplined block. Liverpool playing with two, more often than not, hugging-the-touchline wingers and one static forward, but only one overlapping full-back, meant the side centre-backs Chester and McShane were always free to play the ‘spare man’ role and offer the required positional cover whenever needed. In addition, Quinn and especially Livermore stuck closer to Huddlestone, offering him the desired protection and helping him plug the gaps between the lines.