The headlines in the collection of newspaper reports on www.lfchisory.net (complied by TTTer Graeme Riley!) make grim reading:

A few weeks after this Liverpool lost 3-0 at Old Trafford to make it the club’s worst start in 50 years.  Yes, somehow this was worse than Souness and Hodgson.  Liverpool sat 11th in the table with just 21 points from 16 games, a negative goal difference and just four clean sheets.  Yet this very same game when the nadir was reached also saw the start of the revival as Brendan Rodgers switched to the rarely seen (in England at least) 3-4-3 system.

Speaking live on British TV after the FA Cup win at Crystal Palace on Valentine’s Day, Rodgers gave about as brutally honest an assessment as you’re ever going to get from a Premier League manager:

“The league game [at Palace] earlier in the season was the making of this team. We had no pace or penetration in the team. Our performance level and results could not have got any worse. It was then about trying to arrest the momentum which was very negative. And we got seven points out of nine.  In that period it was then about looking for a system where we would get our intensity back and get our technical players onto the field.”

Rodgers was speaking the brutal truth when he said that “performances couldn’t have got any worse”.  By pretty much any metric than matters, Liverpool ranged from “bad” to “worst in the league”: 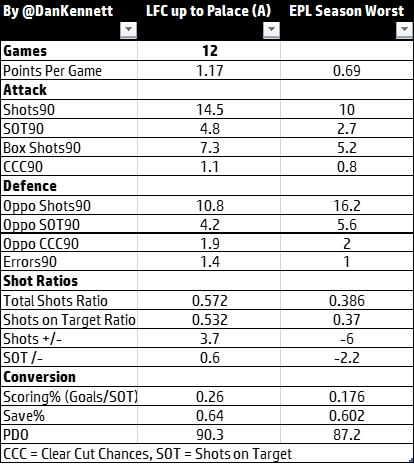 (Notes: Liverpool data available on my LFC Performance Dashboard in tableau. EPL season data via Objective Football and Who Scored)

Liverpool were toothless in attack, generating just 1.1 clear-cut chances per game (Aston Villa this season are the worst in the league with 0.8).  In the ultimate double-whammy, Liverpool were also a shambles at the back making 1.4 errors per game (far worse than Everton’s 1 per game this season) and haemorrhaging 1.9 clear-cut-chances a game to their opponent (a fraction lower than Spurs’ shambolic 2 per game).

In between the Palace game (23rd November) and Old Trafford (14th December), there was a visible change in approach.  Liverpool played five matches in which the objective seemed to be to win ugly and the performance level was generally dreadful, however the bleeding was stopped to some degree:

The last game of that sequence was one of the biggest of Rodgers’ managerial career so far, a win or go-home match against Basel. The following team started that critical game:

There was very little indication that night of what was to come.

Out of the Champions League into the group stages and floundering in the Premier League, Rodgers was under intense pressure from fans and media alike. The manager then chose to unveil his solution to “get the intensity back” and the “technical players onto the field” at the home of his deadliest rival with the whole world watching on TV.  The initial three at the back was Johnson-Skrtel-Lovren with Henderson & Moreno at wing-back, Raheem Sterling at centre forward and the Duracell-bunny front three of Coutinho-Lallana-Sterling.  Liverpool lost heavily yet David de Gea was a unanimous man-of-the-match.  From nowhere, Liverpool had 9 shots on target and 3 clear-cut-chances, as many as they’d managed in the five previous league games combined.

By the end of the Burnley match on Boxing Day, the back three of Emre-Skrtel-Sakho was in place, as injuries ruled out Johnson, then Lovren and then Kolo Toure.

The renaissance was officially in full flow when Swansea were hammered 4-1 at Anfield on the 29th December in a performance that can only be described as quintessential Rodgers.  Finally the Rodgers identity was back: pace, penetration, possession and pressing.

Including Old Trafford, Liverpool have played 13 games with the 3-4-3 and by any metric that matters are just about the best team in the entire league, despite playing a schedule of above-average difficulty with five games against top seven clubs! 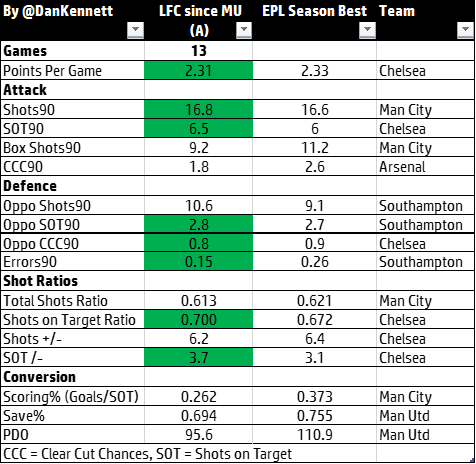 In the table above, the column on the right is the season’s best total in each category.

With the 3-4-3, Liverpool are outperforming the season’s best in the following categories:

Liverpool are matching (or virtually matching) the season’s best for:

The most impressive of the underlying numbers is the 70% Shots on Target Ratio (SOTR).  Of all the emerging performance metrics, SOTR is probably the best overall indicator of “team quality” as it shows the control at both ends of the pitch.  Over the 13 games, the SOT count is 84-36 in Liverpool’s favour. Seventy per cent represents an elite level of performance that very few teams ever reach.  I ‘ve had it confirmed by @BenjaminPugsley that, this season, only Chelsea have bettered 70%, getting as high as 74% in the first half of the season. Man City and Arsenal haven’t broken 67%

The 3-4-3 has turned Liverpool into both the best attacking AND the best defensive team in the league, all in the space of three months.  If anything, the defensive performance is even more impressive than the attack.  It’s seven clean sheets in 13 games with 3-4-3 and who would’ve predicted that a Brendan Rodgers team would become the best defensive unit in the Premier League?   It’s an absolutely astonishing turnaround.  If Brendan deserves brickbats for the first three months, he deserves all the bouquets now. 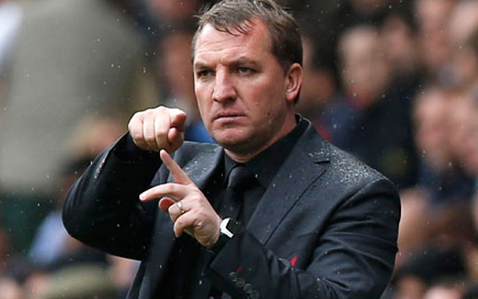 I think the only true test of a manager in any walk of life is whether they are making the most of the resources at their disposal.  After a very difficult start, Rodgers has found a system that accentuates the strengths of the majority of his players whilst mitigating most of the weaknesses.  The end result is a team that is far, far, greater than the sum of its parts and this is testament to his world class coaching ability.

As an analyst I’m certain that, in time, opponents will develop solutions to neutralise and exploit the 3-4-3 but there are no signs of this happening yet.  In the meantime, Liverpool look well placed to ride this wave of elite performance all the way to Wembley and automatic qualification for next season’s Champions League.