Neither manager sprung any major surprises formation-wise or in terms of line-ups. For Liverpool possibly the biggest question was whether Gerrard would start, given the nature of the game, but he remained on the bench with Sterling starting at wing-back and Lallana next to Coutinho.

The visitors went with exactly the same starting XI as in their last game – arguably their most impressive in the past few months – against Tottenham. Di Maria, returning from suspension, remained on the bench with Mata allowed to continue his fine form on the right. 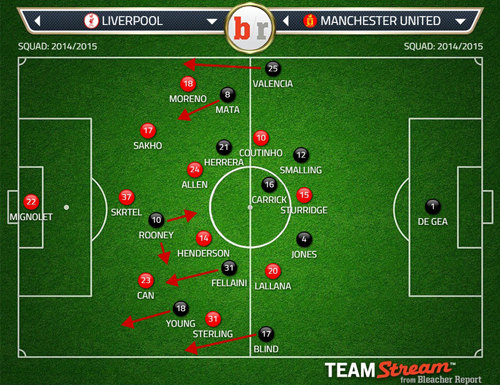 The importance of pressing

In principle pressing is one of the most – if not the most – game-changing tactical facets. Well-timed and efficient pressing has the potential to completely ruin the opposition’s plans, no matter how suitable or well executed it may be. Pressing has that completely destructive power to turn the game around and favour whoever does it more and/or better, often bridging the gulf in quality and levelling the playing field for an inferior team facing a clearly superior opponent.

Pressing also becomes hugely important and game-defining in clashes between two teams both capable of getting hold of the ball and imposing possession dominance on their own. Whoever presses more and/or better is able to exert a higher degree of control over the game, due to drastically limiting the time and/or space on the ball for the opposition, and in turn is able to use their quality in possession to hurt the opposition. It is potentially the decisive winning ticket.

For this game, both teams were inherently able to boss the play in terms of keeping the ball and setting out a clear route to turn possession supremacy into penetrative attacking moves. As such the key becomes who will be braver out of possession and press its opponent to limit their time and/or space on the ball.

The importance of pressing was even bigger considering both teams have already shown they experience problems dealing with being put under pressure as soon as they lose the ball or try to build-up their way up from the back.

For Liverpool putting Man Utd under considerable pressure out of possession was crucial in two main ways. First, to try and raise the game’s tempo and pace, something that this rather slow, methodical and heavily possession-based Man Utd side doesn’t relish at all. Meanwhile, even if Rodgers is still regarded as a tiki-taka disciple, his Liverpool side has never been as good at using possession to offer penetration as they are in using pace and direct attacks following quick possession turnovers resulting from sudden bursts of pressing to swarm and overrun the opposition. Arguably, bar Allen and Lucas, basically all of Liverpool’s players are much more suited to the latter type of attacking than having to figure out how to use the tons of possession available to them in order to break down well-drilled and disciplined defences.

Second, fast attacks and swift transitions were in theory the key to try and get the most out of the tactical advantage the formation match-up gave Reds . It was imperative to get the ball to Coutinho and Lallana as quickly as possible so the two of them could overload the space between the lines by buzzing either side of Carrick to then feed balls into Sturridge and the wing-backs on-rushing from deep. If Liverpool were going to attack slower and patiently probe in the final third, they would give time for Man Utd to get back into position. Even if there were question marks as to how positionally disciplined and defensively solid the likes of Mata, Valencia, Herrera and Fellaini can be, surely having all of them behind the ball would have provided a much sterner test for the home side than if they were continually left behind and quickly bypassed?

It’s hard to believe Rodgers wasn’t aware of all the potential benefits of pressing this Man Utd side, especially given the formation match-up between his 3-4-2-1 and Van Gaal’s 4-1-2-3, and on the back of the success (playing, if not result-wise) the Reds had in the reverse fixture, among others, back in mid-December.

But for a man who supposedly bases his approach around pressing the opposition high and hard, he remained strangely passive when it became clear his side wasn’t actually doing this. Presumably, if before the game the manager was clear about the need to press the opposition, seeing his team so bluntly not following his instructions would have forced him to repeatedly urge them, or even angrily yell if necessary, do what was already set out as a key part in the overall game-plan.

As to why Liverpool didn’t press and looked so passive and lethargic, bordering on disinterested, when out of possession remains unclear. But what was pretty obvious was that this more or less handed over the overall tactical initiative to Man Utd. Not only were the visitors’ supposed weaknesses not exploited but they now had the perfect environment to showcase their strengths.

Man Utd dominate from the start

In his interview just before the game, Van Gaal openly verified that even if he wanted we wouldn’t have changed his overall tactical approach, formation and personnel following the superb display in the previous game against Tottenham. On one hand this was logical, given how well his side played and that this was one of the few games this season his team displayed all the tactical traits associated with him – solid ball retention, midfield fluidity, diverse attacking threat etc. But on the other hand, such a statement seemed a bit tactically naive given the difference in how Spurs and Rodgers’ current Liverpool have played and provide as a threat formation and personnel-wise, and how Liverpool’s had the potential to easily exploit all of Man Utd’s 4-1-2-3 weaknesses.

What Van Gaal did was a huge tactical gamble, which is somewhat in line with his overall persona, the confidence and utter conviction of his methods and the rightness of whatever he is doing bordering on arrogance. However, as soon as the game started it quickly become clear his gamble would pay off unexpectedly easily due to how Liverpool started the game.

The home side approached the game surprisingly passively. They didn’t put any effort into pressing Utd from high up or even closing them down quickly in the midfield zone. Barring isolated individual efforts, the whole of the Liverpool team looked strangely idle defensively, gifting all the time and even space on the ball to their opponents. 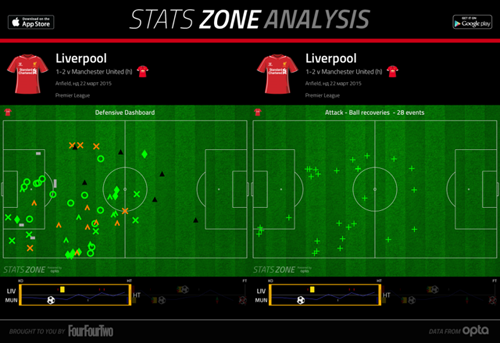 All this passivity completely played into Utd’s hands, and they had the opportunity to settle straight into their preferred patient and methodical passing flow, which in turn allowed them to quickly impose overall control of the game. That no-one really pressed him resulted in Carrick quickly turning into the pivotal player, using his freedom to set the tempo and continually channel possession from deep. 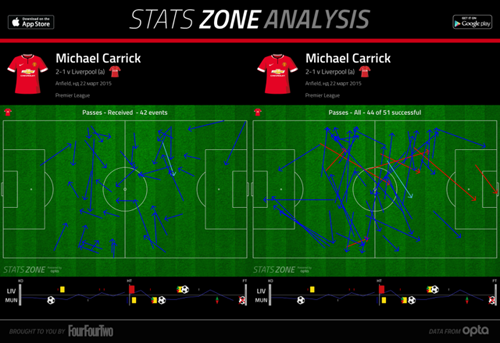 Better to be a Drogba than an Owen?