The plan for 2015 at TTT Towers was to produce a second Transfer Price Index book (with the help of analysts unconnected to the site, who live in data dungeons), but it was perhaps one project too far for me and a couple of others involved. However, the work already prepared for the book will now appear on TTT, the TPI site and the blogs of the individuals involved throughout the year, while new work will be created, for consumption in this manner. Most of it will appear either exclusively for TTT Subscribers, or they will get to see the articles before they go public elsewhere.

The aim is to feed the majority of the work out over the summer months, when transfers are pretty much all anyone thinks about. (People also think about holidays in exotic locations, but usually the main concern is whether or not they’ll get wifi to check to see if that top-class holding midfielder has been signed.) 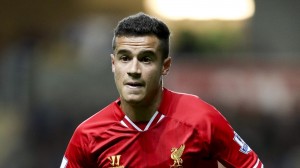 Coutinho, signed at the age of 20.

I’m currently working with an old friend on new ways to visualise the data using Tableau – which not only presents the information brilliantly but also helps you to find new stories within the data. On one of the first tests over the weekend I found something fascinating relating to the difference in signing 20-year-olds and 28-year-olds (and how each goes on to perform for their club in the four main positions of goalkeeper, defender, midfielder and striker). I thought I’d write a short piece about it (with something more substantial on another topic later in the week).

While all players are different, I’ve long been interested in the comparison between players supposedly on the cusp of greatness and those apparently already there. It comes down to the notion of is it better to buy potential or ‘ready made’ players. The data paints quite a clear picture of the best approach.