Ahead of this game Koeman had plenty of selection dilemmas based on who would be available and who to start with given the exact starting approach. The Dutch welcomed back the young left-back Matthew Targett, which spared him the potentially awkward decision of having to play Yoshida at left-back against whoever of Ibe or Markovic started at right wing-back for Liverpool. But Schneiderlin was passed fit only for the bench. Interestingly, neither of Mane or Tadic started the game – Mane left out for being late turning up – so Ward-Prowse and the Benfica loanee Djuricic were named in the starting XI.

Meanwhile Rodgers had one more issue to solve given the last-moment injury to Sakho. Logically Lovren started the game but interestingly it was actually Can who was switched to the left hand-side of the back three unit. Moreno was given a rare break with Markovic starting at left wing-back with Sturridge, coming on the back of consecutive starts and 90 mins on Thursday, replaced by Sterling in attack. 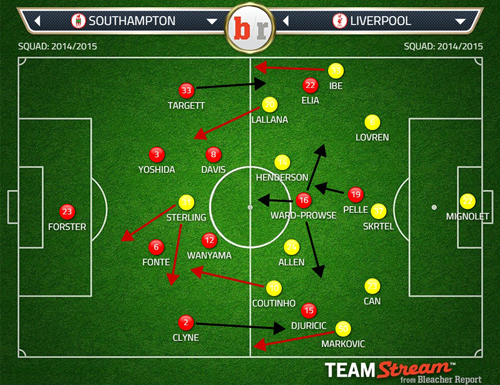 One of the main talking points prior the game was how exactly Koeman would approach this game tactically. There were at least a few legitimate variants, both personnel and formation-wise, ranging from a cautious 4-1-2-3 to an attack-minded 4-2-3-1. As the game started it become clear the Dutch manager had opted for a Chelsea-like 4-2-3-1 but instead of it being either defensive-minded (as in the COC semi-final first leg) or thoroughly attacking (as in the second leg) it was kind of a mixture of both strategies used by Mourinho.