For this game Rodgers didn’t rotate the side following the exhausting second leg game with Chelsea in midweek, the only change being enforced with Gerrard taken out of the squad as a precaution and Lallana coming into his place within the now customary 3-4-2-1 shape.

The big news was Sturridge’s return – he started on the bench but came on later in the second half to score the second goal and seal the win for the Reds.

On the opposite side, Allardyce didn’t have any fitness-related issues as his team had the whole week to rest and prepare for this game. The Hammers, however, had something of an injury crisis at the back with no fewer than four defenders doubtful for the game – centre-backs Tomkins and Collins and right-backs Jenkinson and O’Brien. Eventually Tomkins and Jenkinson sat out the game with Collins and O’Brien just passed fit to start the game. 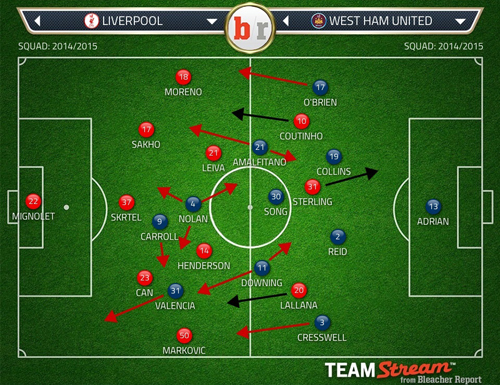 West Ham start proactively, keep the game in Liverpool’s half

The main talking point was how both teams would approach the game, given the supposed difference in the fitness and freshness levels. Eventually this didn’t prove a decisive factor, given West Ham’s injuries before and during the game and the absence of important players such as Diafra Sakho and Cheikhou Kouyate.  This largely took any advantage West Ham might have had in terms of nullifying Liverpool’s strengths and exposing their weaknesses in different periods of the game.