For this game, Rodgers didn’t have any new injuries. But with Markovic suspended and Sterling fit only to feature on the bench, it meant drastically fewer options for potential rotation. As such it wasn’t a surprise to see Liverpool going with the same XI as against Palace on the weekend with Ibe replacing Markovic on the right.

On the other side, Bilic didn’t have any major injury worries bar the loss of his first-choice keeper Tolga Zengin. Apart from that Besiktas also lined-up with a full-strength side in their usual 4-2-3-1 formation. 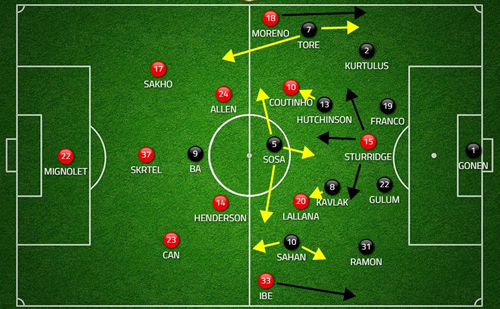 Recently there is a trend where with Liverpool being predictable with their starting XI, formation and overall tactical set up, it’s how the opposition decides to counteract them that is the factor that mostly determines how the overall game will play out tactically. Here it was largely the same.

Besiktas opting for a cautious approach

Since Rodgers switched to the 3-4-2-1 in mid-December, Liverpool have already faced a variety of approaches (formations, strategies etc). Some of them made it far easier  for the Reds than it should have been (Arsenal, Swansea, Sunderland, Aston Villa), others made it much harder (Burnley, Leicester, Chelsea, Bolton, Everton, Tottenham). Some opponents chose to press Liverpool and attack them quickly down the channels (namely Burnley, Leicester and Chelsea), others decided the best way is to try and fully dominate them (only Spurs). Some, like Everton and Bolton, preferred to focus on properly stifling Liverpool’s threat.

Being a two-legged clash with the first one away from home, it wasn’t a surprise to see Bilic opting for a cautious approach, which proved to be exactly the same as what Mourinho did in the first leg of the Capital One Cup semi-final last month. It wasn’t the similarity in the starting 4-2-3-1 formation though. It was precisely how the players were tasked to play within it, both in and especially out of possession.

To start with, whenever Liverpool tried to build-up from the back, Besiktas’ front quartet pushed higher up, occupying the space between the Reds’ back three and midfield four with the aim to cut-off the supply between them and deny the Reds the chance to quickly hit forward passes. From time to time, the advanced positioning of the front four unit allowed Besiktas to exert a well-timed and well-executed in terms of coordination and support press. Thus giving Liverpool some troubles, which throughout the game led to some cheap concession of possession.

However, whenever the home team managed to bypass Besiktas’ initial occupancy of their passing angles in the first phase of the early build-up play and move the ball into the midfield zone, the visitors were quick to drop back in a flat 4-5-1 formation. The wide forwards were now tasked to get back and focus on marking the wing-backs, while the deep-lying midfield pair of the captain Kavlak and Hutchinson stuck tight to Coutinho and Lallana. Sosa patrolled the space just in front of them, aiming to further compress the space in the midfield zone and prevent balls coming to Liverpool’s advanced midfielders. The full-backs, meanwhile, were told to quickly tuck into narrower positions and help screen the centre-backs (as the two holding midfielders were man-oriented and there was the danger to be dragged out of position, hence leaving the space between the lines wide open).