Chelsea stand in the way of Liverpool and a return to Wembley when the two sides meet in the first leg of the Capital One Cup semi-final at Anfield on Tuesday evening – 7.45pm kick off UK time – in what will be the Reds’ 15th semi-final appearance in the League Cup. Liverpool have an excellent record in this competition having reached 11 finals, winning eight with us last lifting the trophy in 2011/12. Chelsea have won the tournament four times with their last tournament victory coming in 2006/2007. 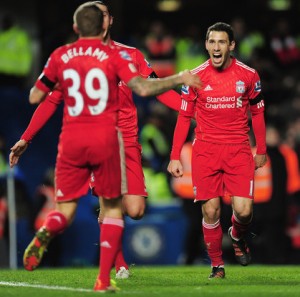 The two sides last met in this competition at the 5th round stage in 2011 at Stamford Bridge with goals from Maxi and Martin Kelly sealing our progress, in a season where we reached both domestic cup finals, winning the League Cup (against Cardiff) and losing the FA Cup against Chelsea. There have been five meetings between Liverpool and Chelsea in this competition with Liverpool winning three and Chelsea winning two, with one of those Chelsea victories being the 2005 League Cup final win 3-2 in extra time.

A Celebration, a Blocked Move, a Denied Dream