At the end of this season Steven Gerrard will turn 35. He is without doubt a living Liverpool legend, but no one should remain at a club, or in a side, based on sentiment. The question is, how effective is he, after more than 16 years in the first team?

I’m not a psychologist, but I have suffered my own decline: becoming too ill at 28 to ever play football again (which, coincidentally, happened to be around the time a young Stevie G emerged onto the scene). I became clinically depressed, and felt I’d lost my identity with my inability to play sport, as well as being unable to work a regular job. As such, I can relate to what happened to Steven Gerrard in 2014, and where he is right now. I’ve spent the past 15 years confronting the fact that I am not what I once was. Perhaps men go through the same thing when they reach 65-70, and are forced to retire; but (in an ideal world) they are free to enjoy their spare time. To experience this at 34 must be weird, no matter how much footballers prepare for the inevitable day. 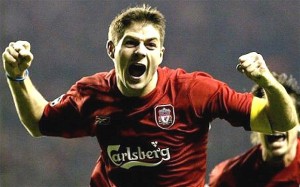 Steven Gerrard was Superman. He wasn’t just any old footballer. Right now, however, he unfortunately is just any old footballer. He still has magic in his boots, of course, with the occasional jaw-dropping pass, and he can still take a penalty as well as anyone. Even when Gerrard had Torres, Suarez, Alonso, Carragher, Mascherano, Hamann, Hyypia and other top players around him, he was perceived to be carrying the team. (He did have a lovely habit of making a killer contribution, mind.) He used to be able to hit a 30-yard shot like a thunderbolt, whereas now he’s mostly a side-footer, worthless as a goal threat any further than 12 yards out. He can no longer run like the wind; now it looks like he’s running into the wind. We are witnessing the dying of the light.

He has a wealth of experience, and was never a brainless player; but he wasn’t the most tactically astute either. More than anything he was a force of nature, and now that force is spent. He is not without worth, but he is no longer a special player. The occasional time when he does something special leads to calls of “he’s still got it!”, but these are fleeting moments that merely remind us of greatness, rather than prove it.

When I look at Gerrard this season I see a man who knows his time has gone. Last season was that time, and, in a new role, he shone for several months. He was brilliant. But it was perhaps a last hurrah. He was able to make the ball do the work, before teams figured out how to snuff him out.

Despite several other things going wrong across the whole team in April and May, he has been lampooned for a slip. After 114 games for his country, in which he seemed to give his all, England fans now mock him wherever he goes. Football has become infested with schadenfreude to the point where his failure is celebrated by fans of clubs with nothing to shout about, and when his failure affected them in not one single way. And it’s not even as if Gerrard is a particularly unpleasant character to neutrals.

In April 2014 it looked like he’d lead the Reds to the league glory that had evaded him since his debut in 1998, and us all since 1990. By July 2014 he was tarred with the failures of club and country. His mental state, I feel, could be seen in his set-piece deliveries as this season got underway, and the stark contrast with how he whipped them in a year earlier; he just didn’t have the same belief in himself anymore. He now took them like a mere mortal. It didn’t need him to be able to run fast, just kick the ball the way he always kicked the ball. But he looked beaten.

By the end of 2014 the Liverpool captain was no longer undroppable. Another unfortunate milestone had been reached. As yet he’s not had a spell on the sidelines – just one game every now and then – so he’s not really being phased out. But, you sense, it won’t be long.

He may yet have an Indian summer; arise once more, like the hero left for dead in a film who somehow returns in the final reel. When I started writing this I was pondering his waning powers, with a few rumours that he might be on his way in the summer; and news is now breaking that he will announce that he’s leaving Liverpool. So his time is running out, here at least.

Gerrard, as a brand, is probably still worth a lot to Liverpool FC, just as his iconic status could still help attract new players to the club. But whereas legends at other clubs accepted being reduced to mere bit-part players, you never got the sense that the same would be true here. When Giggs and Scholes were phased out at United they were omitted by arguably the most powerful manager the game has ever seen, at a time when the club were still winning titles. Gerrard, by contrast, would find himself edged out of a team that, right now, seems unremarkable. If he was at Manchester City he could perhaps be carried along, like Lampard, by half a dozen great players. Instead, he looks exposed, and it’s kind of sad to see, not least with the glee of rival fans thrown in. (All I can say is that if the news is true, I hope he goes abroad; he may be past his best, but seeing him at another English club would be just too weird.)

Something had to give. His value as a player, aged 34, is mixed up in myths and memories. He is fully deserving of his status as one of the Reds’ very greatest; indeed, he may be the club’s best ever, and in the next few months I’ll document just how good I think he was. But the issue of just how good he was, and all that he did for the team over the years, should not be confused with where he’s at now. This point has been reached because, finally, he looks all too human.

His best days are gone. But at his best – wow!