How the hell did Liverpool let a player who will be 35 in May leave on a free transfer? If you ask yourself that question, without the surrounding noise and emotion of what that particular player represents, you’d probably ask yourself how many successful (or aspiring-to-be-successful) clubs keep anyone of that age, aside from goalkeepers? A few go on to 36, 37, but they are used sparingly, and brought out like the best china. They happily accept a diminished role, and use their experience to make an impact.

Frank Lampard, we are told, is tearing it up at 36, as a midfielder-cum-forward, but is that a valid comparison? In the Premier League, Gerrard has played 1,569 minutes in 2014/15, to Lampard’s 364. In the Champions League, Gerrard played 471 minutes to Lampard’s 123. Basic maths tells you that Lampard, who is being used as the example of why Gerrard could stay at Liverpool, has played roughly a quarter of the minutes. Even at 36, he’s going to look fresher (and, of course, he’s surrounded by a host of very expensive and experienced teammates). 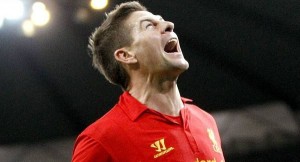 From what I can tell, Gerrard never seemed happy playing anywhere other than central midfield, and never seemed happy when rested.  This, of course, is his right, as a combative character driven to win, who hates being at the periphery. Had he been more accommodating of those two ideas he might be doing what Lampard is now – indeed, what Gerrard himself did against Wimbledon – and using his finishing skills in the final third, without being burnt out chasing all over the park. But at Manchester City there’s no myth surrounding Lampard; at Liverpool, Gerrard is, justifiably, a living legend. That confuses things, puts emotion at the heart of the issue.

A week after ‘Stevie G’ announced his impending departure, I’m still trying to take stock of the situation and make sense of how this came to pass.