A Different Kind of Business Model

A Different Kind of Business Model

Over the past 20 years football has changed beyond recognition. The very identity of the football today is very different; the game has moved with society. Football was always a working class game in the 70s and 80s – it was a release for many of the everyday drudgery of life. But times have changed, and so has the working class identity of football.

It is a difficult transition for many traditional football fans, money has poisoned the game in so many ways and the gap between players and supporters is now so wide that there is very little connection. A player will kiss his club’s badge one week, and the next he will be off kissing another club’s badge for an extra £10k a week. That’s how the game works these days.

It isn’t just the connection with the players that is slowly eroding; it is also the connection with the club for many supporters. High ticket prices and globalisation make it difficult for any club to keep a local identity. Football clubs have always been an important part of local communities, but that relationship is becoming far more strained in today’s game.

Liverpool is perhaps one of the clubs that feel the transition of identity more painfully than most. The club was built on a strong socialist foundation, and has struggled to find its way in a game that is now a capitalist playground.

The biggest difficulty facing Liverpool, and whoever owns the club in the future, is how do you marry the club’s tradition with a place in the modern game? How do you make the club competitive without selling its soul? How do you find the balance between low and affordable ticket prices and competing in a game where success is guaranteed to clubs with the deepest pockets?

These are not easy questions to answer.

Looking to Germany can help find some of the answers; the model that clubs use in German football gives fans a voice and an emotional and financial stake in the club, but the Dortmund model isn’t something that you can just replicate at Liverpool.

Ultimately, the current owners of Liverpool will want a return on investment. Once the stadium has been redeveloped, the value of the club will increase to in excess of £500m (a conservative estimate) you would expect. The value of the club will always be a barrier to fans having a stake in the same way they do at Dortmund. But that doesn’t mean fans can’t have any stake.

One of the best things about FSG I believe is that they are willing to be innovative, and they do care about supporters as stakeholders. The creation of the supporters committee is evidence of that. If they are willing, there are steps they can take to create a new kind of business model at Liverpool, a model that can drive the club forward and help supporters feel they are a bigger part of that journey.

The Supporters Committee has been a huge step in the right direction, and it is a pointer towards the owners’ respect of supporters as stakeholders. But does it have enough teeth in its current guise? How much influence does it really have?

I think that the idea behind the committee is absolutely right. Sourcing representatives from the different demographic of supporter helps the club listen to collective views and issues from the entire fan base. It is put in a place by a democratic process.

But the relationship with the club is purely consultative; there is only influence if the club decides to take action. For the supporters committee to have real teeth, it needs to have a voice at the highest level.

I strongly suspect that the appointment of Kenny Dalglish to the Board was an attempt to give supporters a voice at the highest level of the club. But if there is a commitment to listen to supporters as stakeholders, why not invite a fan representative onto the board in an advisory or non-executive capacity?

The Chair of the Supporters Committee is a ready-made role. By having a fan representative on the Board, the leaders at the club will be better informed about how decisions will impact the fan base, and strategic issues that really affect fans will have visibility at the highest levels.

The Supporters Committee is in place to bring fan issues to the club hierarchy, but the concept of having a supporter representative feeding into the strategy and direction of the club – on behalf of supporters – would be something unique.

The Board exists to set the direction and strategy for the club, and to make the big ticket decisions that influence the future. Many organisations have a diverse range of skills and views that make up a Board – if Liverpool wanted to be different and look to lead in how decisions at the club are made – there is opportunity there.

The cost of going to the game is probably one of the most emotive and restrictive in the fan base. The headline increases don’t make for good reading, with ticket prices outstripping inflation by a huge amount. But that doesn’t tell the entire story.

As the game has changed, so has the match day demographic, and also the match day experience. The running costs of football clubs have increased tenfold. Most clubs are under a great deal of pressure to squeeze every last penny of revenue, which of course, comes out of the pockets of supporters. Liverpool is not immune to that.

There are other revenue streams in addition to match day income, but bums on seats are still a significant percentage of total income. It is an area where we have fallen far behind our direct rivals and will only begin to start bridging the gap once the stadium redevelopment is complete.

So how do you keep tickets affordable whilst making enough money to keep your team competitive? These are conflicting priorities – yet both something that supporters demand.

What you have to do is to have a good mix of revenue streams, through commercial, media, sponsorship and ticketing – which is something the club is trying hard to do. The problem is, so is every club. The latest TV deal is huge, but it is not like Liverpool are the only club benefitting from that.

Tiered ticketing is the way to go, without question. There needs to be more cheap seats available at Anfield so that younger, local kids can get to the game. And so that cost isn’t a restriction for those who can’t afford it.

Ticket prices are likely a much bigger issue for the local match-going demographic, who either go to the game every week, or want to go to the game every week. Liverpool has an incredible global support, with fans from across the world getting to Anfield on a match day – but it is that recurring cost that is the issue – and it also creates a secondary problem – how do local supporters, who are the heartbeat of the club’s identity, find a way to the game?

If you look at another huge sporting event, the New York Marathon, you will find that entry is cheaper if you live in New York, and it is easier to get a place, despite it being a global event with thousands of international runners taking part.

Is there scope for Liverpool to ringfence 10% of tickets per game for people with a Liverpool post code? And to work with local travel operators to introduce match day travel inclusive of the ticket price so that local supporters don’t have to pay to get to the game as well? Also, what about discounts in Anfield if you show your Season Ticket at the Kiosk? And of course, the option to an interest-free monthly amount to pay for your Season Ticket?

All of these things are achievable, and may happen at other clubs already. It isn’t just about ticket prices; it’s about the total cost of going to the game. Reducing that overall cost, and getting more local supporters into Anfield, can go a long way to reducing the angst some supporters feel over the cost of tickets.

One of the things that supporters would probably appreciate is a real stake in the football club, something more tangible than the emotional attachment. I can understand why any owner would not want to dilute its shareholding, but if there was scope to ringfence 5% of shares in Liverpool for supporters to buy, it would create a more inclusive relationship between owners and supporters.

It is something Arsenal has done in the past, and it is taking a small part of the model that works so well in German football. It can benefit the owners in the shorter term as by releasing 5% of shares to supporters it could recoup some of the cost of the stadium redevelopment – which is an interest-free loan FSG have made to the club.

FSG have shown previously that they are willing to use a stake in the club to strategic advantage, with LeBron James being given a small shareholding in return for a stake in him.

This is something the club could do on a regular basis. It would be a really useful benchmark to find out how engaged supporters are, and to understand perceptions and build your narrative to challenge them.

The question is, how well does Liverpool understand its supporters? There is always going to be the investable noise about money spent etc, but the health and progress of the club is a much bigger picture than one transfer window.

The way football clubs are constructed is different to any other kind of business or organisation. In a typical world, leaders would see supporters as consumers, but in football, the emotional attachment means that the relationship is much closer to that of employees than consumers. Every supporter is as passionate about the club as its employees. Asking them for a view on how things are progressing is a mechanism to engage.

When TTT asked supporters for a view, just through Twitter, there were almost 1300 survey responses in less than two hours. That tells a story.

My feeling is that what many Liverpool supporters want is an active say in the direction of the club, and an active influence over its identity. That seems like a lot to ask, but it doesn’t have to be in conflict with the ownership agenda. The two things can run in parallel.

I’ve always thought that FSG are good owners with good intent for Liverpool, and I retain that belief. But any owner will always be a custodian of the club; the real guardians of the club’s heart and soul are its supporters.

It is about being open to a different kind of business model, one where you take supporters from the periphery into the heartbeat of the club. Perhaps that is the mechanism to move away from a ‘them’ and ‘us’ culture to something much more united.

And it isn’t exclusive to Liverpool FC; it’s a growing problem that football needs to resolve. 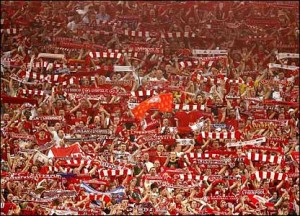 Wembley Still On, and Mario's Onesie!