Given the nature and the importance of this game, it was understandable Rodgers went with an experience-based starting XI. Moreno, Lallana and Coutinho were replaced by Enrique, Allen and Gerrard, respectively; while Toure’s injury forced Lovren back into the team.

Although the shape remained the usual 4-2-3-1 when Gerrard plays, there were some tweaks made to it – namely in swapping Sterling and Henderson down the flanks.

On the other side, Basel went with their current in-form players. It should be mentioned that five of them didn’t play in the last league game due to being either suspended or deliberately rested ahead of this game. As is often the case in the past couple of months, Sousa started with a 4-1-2-3 formation. 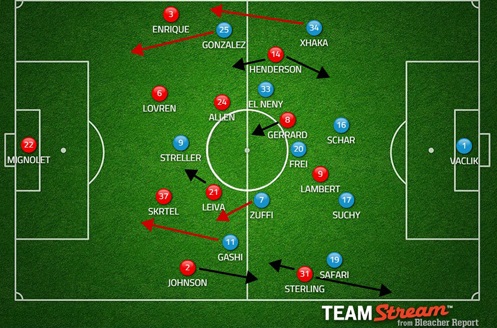 Basel contribute to a positive and open start

Many may have expected to see Basel approach the game cautiously, looking to defend and sporadically threaten on the break, given they only needed to avoid defeat to progress. However, this would not have taken into account how they are playing under Sousa and the fact that even against Real Madrid – even at the Bernabeu – the Swiss team opted for an ambitious and expansive style of play. The fact they had the majority of their starting XI rested in one way or another (either not starting or replaced early in the second half) in the previous game, meant they would also be expected to be fresher than Liverpool.