A place in the last 16 of the Champions League is the prize up for grabs as 3rd placed Liverpool host 2nd placed FC Basel at Anfield on Tuesday evening – 7.45pm kick off UK time – on matchday six. The Swiss outfit sit two points above the Reds and know a draw will be good enough to see them qualify to the knockout stages for the first time since 2011/12. For Liverpool, only a victory will see us progress and look forward to Champions League football in February. 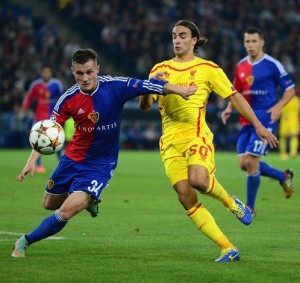 Basel sit top of the Swiss Super League with 41 points from 18 games and are unbeaten in their last seven league games, winning the last five in a row with a goals tally of 14 for and just one against. Less impressively, they’ve lost both of their previous away games in the Champions League this season going down 1-5 to Real Madrid and 0-1 to Ludogorets but did claim a 1-0 victory over us at the St Jakob Stadium on matchday two.