As is becoming the norm throughout the congested schedule, Rodgers made a couple of changes to his starting XI. The formation was also tweaked from the recently used 4-2-3-1 to 4-1-2-3.

Moreno replaced Manquillo at half-time in the last game, but here he was in from the start, with Johnson starting at his natural right-back slot. In midfield, Coutinho replaced Gerrard.

For Sunderland, Poyet was more proactive in rotating his side. Even if the shape remained the usual 4-1-4-1, the manager changed at least half of his outfield players. Coates (who was given his debut against Man City) couldn’t feature, so Brown was back to partner O’Shea. In midfield, Cattermole and Rodwell were replaced by Bridcutt and Gomez respectively, while from the front three only Wickham kept his starting place. Adam Johnson and Altidore came in to replace Buckley and Fletcher. 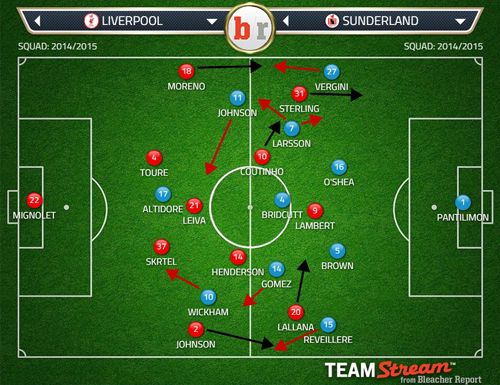 Sunderland dominating from the start

Arguably, the initial expectation was to see them camp in their half, defend with numbers behind the ball and wait for suitable opportunities to threaten on the break. However, as soon as the game started Sunderland took many by surprise with their open and positive approach.

The way the Mackems defended was expected. They did not really press hard from high up the pitch, but quickly dropped back into their 4-1-4-1 shape and looked to cover the whole width and depth in their own half. The players showed very good discipline and work rate to create and maintain a very tight and compact defensive shape. Poyet’s team also showed great understanding and organisation about how exactly they worked in twos and threes when opting to close down the ball once Liverpool transitioned within their half.

The main surprise though was in relation to how exactly Sunderland behaved when in possession. The visitors did not only limit themselves by simple and straightforward balls to the two big men up front. Instead, they showed a high level of confidence and composure to actually take the game to Liverpool right from the off.

The rest of the article is for Subscribers only.

Calm Amidst the Clamour, Boos for Wenger