Coming off the back of five and four days’ rest, respectively, it was not a surprise to see Burnley and Liverpool retaining the same starting XIs as last weekend for this game. Dyche continued with his usual 4-2-2-2 formation, while Rodgers kept faith in the 3-4-2-1 he introduced during the past couple of weeks. 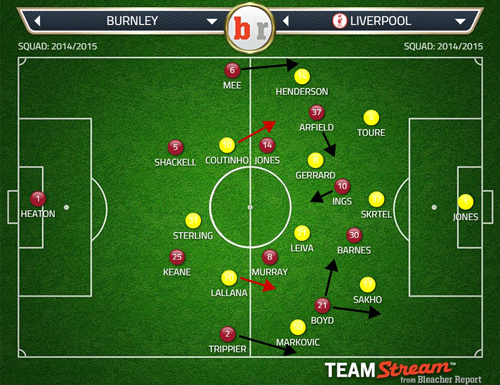 In games like this, when the gulf in overall quality between both teams is so obvious, it’s a matter of can the inferior team match the superior one to level the playing field through mental strength and a suitable tactical plan. To their credit, this is what Dyche’s players did for the first half.

The Clarets simply showed greater desire, fight, and determination to impose their own style and make the game suit them. As a result, the clash became a scrappy affair where spirit, teamwork, and work rate triumphed over individual qualities and technical abilities. Dyche’s players channelled that sheer motivation and enthusiasm into an efficient pressing process, which combined with how intelligently they used their shape to occupy the opposition seemed to completely unsettle Liverpool right from the start. Tactically, Burnley didn’t provide any major surprises about how they would approach the game. It was a case of their usual strategy being perfectly suitable to first nullify the opposition and then put them under pressure using the very direct and crossing-based attacking method Liverpool usually struggle to deal with.

Simon Says, and So Does Simeone ...