Following his minor injury crisis and smaller squad (only 19 first-team outfield players) Ancelotti didn’t rotate his starting XI at all.

Carvajal, Khedira, Illarramendi and Coentrao all missed the game through injury, hugely limiting the scope for any rotation the manager might have been keen to adopt. As such, Real Madrid used the same team as at Anfield a fortnight ago with the only change being the return Ramos, playing instead of Pepe, as Varane’s partner at the back.

Prior to the game, the clash was dominated by the outcry following Rodgers’ choice for starting XI rather than how his team might have been instructed to act tactically. Partially this was to be expected given it was the first time the Liverpool’s manager actually rotated his side so heavily for a clearly meaningful game.

Rodgers made seven changes in the XI that started the last league game at Newcastle – only Mignolet, Skrtel, Moreno and Allen kept their places. Peripheral figures like Toure, Lucas, Markovic and Borini got a rare chance to feature in a starting XI, while Manquillo, Can and Lallana were recalled in the starting XI – all of them featured against Hull from the start, but sat out the trip to Newcastle. Formation wise Liverpool reverted to the 4-1-2-3, having been playing with 3-4-2-1 and 4-2-3-1 in their last two games (Newcastle and Swansea in the Cup, respectively). 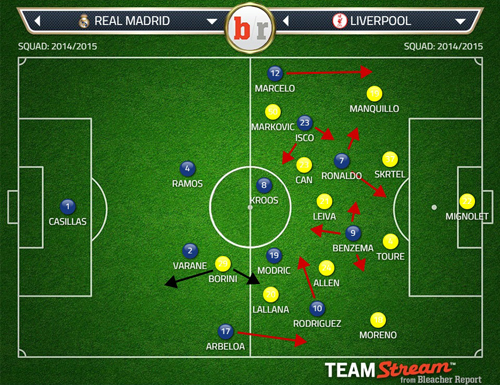 Although the score was closer this time, the way the game actually played out was very similar to the clash at Anfield. The main difference was that the opening period was equal, rather than dominated by Liverpool and their active pressing, as was the case two weeks ago. The Reds played here with a different formation and vastly different personnel, but although they looked somewhat more solid, they still had huge defensive holes and showed next to no attacking threat.

For Real Madrid the game was similarly simple in that as soon as they gained possession control over the game it was a case of their individual qualities shining through. Still, it was a case of them not performing up to the expected high level in attack and as at Anfield deliberately gave up the initiative in the last half of hour or so.

In contrast to the Anfield game, the opening here was calmer and quieter. Obviously, the main difference that contributed to this was the lack of fierce and aggressive pressing that Liverpool applied in the home game. Expectedly the Reds approached the game in a much more cautious and passive manner, focussing on solid ball retention rather than pressing and direct attacks.

Both Real Madrid and Liverpool looked to pass the ball around and use the possession as the main source to settle into the game. Neither of the teams looked to actively press their opponent, which resulted in plenty of time allowed for both teams to get on with their possession-based approach.

Still, the difference in both team’s mindset and overall strategies was easily visible in how they used their time on the ball. Expectedly, the home team looked to push forward, committing plenty of bodies ahead of the ball to open up attacking possibilities. Real Madrid’s possession play was more offensive in that the players obviously looked to promptly transition forward and attack in a direct manner, not wasting too much time to recycle the ball in deeper areas. In contrast, Liverpool unsurprisingly tried to be more careful and focussed on retaining their possession in deeper areas and for far longer. Presumably, this was their way to further cool the tempo of the game and prevent being put under the cosh right away. 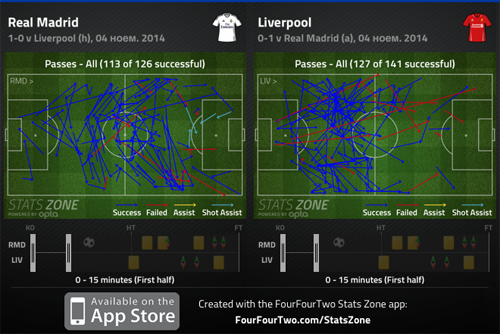 However, for all their cautious nature in possession, Liverpool actually contributed to Real Madrid having their first two goal-scoring chances in the game in a very cheap way. The Reds gave up possession very sloppily twice inside the first ten minutes when they tried to simply retain the ball and go on with their ‘keep the ball’ starting approach. What’s more, they did so in very dangerous zones – the first one on the edge of their penalty area, the second inside their box. Fortunately for them Mignolet stayed concentrated and sharp enough to block the incoming shoots.

Apart of these two early incidents, what quickly tipped the balance in favour of the home team was the poor way Liverpool appeared to defend the midfield zone. The formation of the visitors looked more like a narrow 4-1-2-3 (or a 4-3-2-1) given the way Lallana and Markovic both looked to tuck infield when the team was out of possession. However, instead of meaning they were going to put pressure on Real Madrid’s tempo-settling deep-lying playmakers, they largely failed to participate defensively in any way. As no-one was there to put pressure on Modric and Kroos, the home team had plenty of time to move the ball around and gradually settle into possession dominance to then quickly mount the pressure on Liverpool.