Pardew kept his usual 4-2-3-1 formation but gave the young holding midfielder Abeid his first Premier League start alongside Colback. In attack, Ameobi and Obertan started down the flanks while Cisse was passed fit enough to start the game.

On the other side, Rodgers made some surprising selection and tactical decisions. For the first time this season, Liverpool lined-up with a back three shape in what was more of a 3-4-2-1 formation. Interestingly, Johnson was played as the right-sided centre-back, Sterling was moved out wide as the right wing-back, while Henderson was pushed in attack as the left-sided attacking midfielder. 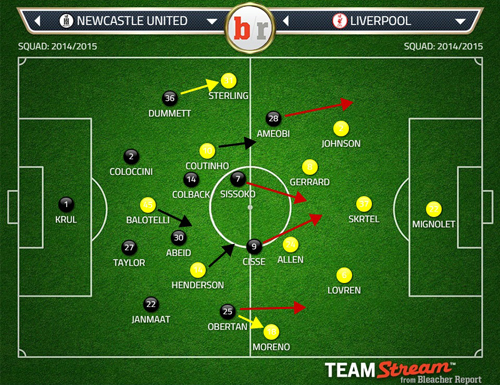 Once the starting XIs were announced, it seemed like both teams would play in a rather passive or reactive 4-1-2-3 with an emphasis on shutting the space through the middle. With neither team having the personnel to take the initiative and put the opposition under the cosh from the start, the game promised to offer a very cagey opening.

But as soon as the game begun, however, it became clear the tactical context was different, even if ultimately the way both teams started still led to the expected cagey nature. The main reason for this was Liverpool’s surprising starting approach in terms of formation and personnel.

Although it was Liverpool setting the tone for a completely different tactical context than initially anticipated, it was actually Newcastle doing the majority of the actual tactical work during the game.

The home team started the game in their usual 4-2-3-1 formation and spent the opening few minutes trying to close down Liverpool in kind of a 2-4-4ish formation. This was in line with what Pardew openly stated in his interview just before the game, where he revealed he is planning to put pressure on Liverpool and use his team’s physicality to prevent the Reds from getting going with their passing rhythm.

However, the way Liverpool lined up in their 3-4-2-1 formation it soon became clear the home team had some issues closing down effectively. This was because of the front pair logically struggled to simultaneously occupy the centre-back trio and prevent the ball being played into the dropping midfield pair. The way Liverpool easily worked around the half-hearted pressing quickly exposed Newcastle’s midfield pair 4-v-2, which in turn led to certain defensive issues early on. The visitors used their numerical advantage to work the ball forward and create a couple of dangerous attacking moves in the opening five minutes or so.

But then, watching his initial approach not really working and the way his side struggled defensively, Pardew quickly re-organised his side. In the eight minute he gesturing to his team ‘3-5-2’. What was interesting though was instead of this being a direct instruction towards his team to switch to that formation, it was in reality more of Pardew verifying to his team what Liverpool were up to and how to adjust to all of this. Newcastle continued in their 4-2-3-1 formation, but certain tactical tweaks soon became apparent.

The Geordies dropped their pressing and instead looked to create a 4-4-2-0 formation with the front pair now moved back closer to the midfielders, giving up pressing Liverpool’s back three unit. Obviously Pardew saw his team a couple of times being easily cut open through the middle and decided the initial pressing approach is not worth the risk, especially once it became clear Liverpool aren’t vulnerable to being pressed due to their back three unit and dropping deep midfield pair. Now Newcastle became more passive when out of possession, compressing the space through the middle and preventing Liverpool enjoying their previous numerical advantage in that zone.