Liverpool will be hoping to end Chelsea’s unbeaten start to the season when Jose Mourinho brings the current league leaders to Anfield on Saturday; 12.45pm kick off UK time. Mourinho’s side are the only team in the Premier League yet to suffer a defeat, having won eight and drawn two of their 10 league games prior to Saturday and sit 12 points above Liverpool, who occupy 7th. The two occasions they have failed to pick up maximum points in the league this season, both came against northwest opponents: drew 1-1 at Manchester City and repeated that scoreline at Manchester Utd.

Liverpool should take some confidence from their display against Real Madrid at the Bernabeu on Tuesday evening, despite losing 0-1. Chelsea could only manage a 1-1 draw away at Maribor on Wednesday evening, which takes their record in all competitions this season to won 12 and drawn four. 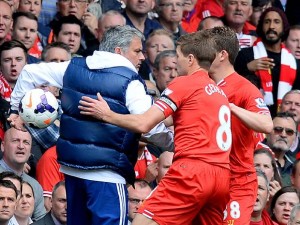 Liverpool lost the corresponding fixture last season 0-2 with goals from Ba and Willian ending our 11-match winning streak and probably proved more damaging to our title challenge than our collapse at Crystal Palace. It will be interesting to see if Chelsea use similar time wasting and defensive tactics that proved so successful for them in this fixture last season.

Didier Drogba is Chelsea’s top scorer against the Reds with nine goals in 26 appearances. For Liverpool, Steven Gerrard has made 36 appearances against the Blues and has surprisingly scored just once, which was in the 1-4 defeat suffered at Anfield back in October 2005.