There has been increasing speculation that Liverpool will soon sign free agent Victor Valdes (although there have been reports that he has refused a four-day fitness trial).

Already the debates have started amongst Liverpool fans. Some are hailing him as the silver bullet to solve all our problems, some think it’s a pointless move and others want to know what he will bring to the team.  This analysis is going to try and provide a bit more information about the latter.

Let’s start by supposing that the perfect goalkeeper is someone who:

If we want to test this theory, the first problem is getting hold of data to analyse. There is very little for goalkeepers on the usual apps and websites (StatsZone, Squawka and WhoScored). There is some data for Saves (Squawka is the best with the possibility to see shot origin location and save location). However, none of them really have the data for ‘Command of box’ or for ‘Distribution’. Opta collect data for Catches/Missed Catches, Standing Saves, Diving Saves, Punches, Errors, ‘Smothers’ and ‘Sweeper Keeper’ but the providers don’t display it. There is some distribution data but it’s not really possible to break down to goal kicks, ‘launches’ (hoofs) or throws.

Fortunately, ESPNFC.COM has player profiles (click here for Valdes) that have Save data for all competitions, all the way back to 2004/05.  It’s not including locations but it does allow us to generate very large sample sizes. In the case of Valdes, it’s over 1,100 Shots On Target faced over 10 seasons. Large samples are good because they can allow us answer important questions such as in this post I did for Statsbomb: Are-some-goalkeepers-better-at-saving-shots-than-others?. The funnel plot in that statsbomb post shows how randomness decreases as the sample size increases and proves that some goalkeepers are better at saving shots than others. This in turn kills the damning-with-faint-praise argument of “He’s a good shot-stopper but…” as many goalkeepers are in fact average shot-stoppers, some are below average and only some are good. Being a good shot-stopper should be lauded as “a good thing”, not as some kind of minimum requirement.

Using the ESPNFC data we can get an overview of Valdes’s entire career: 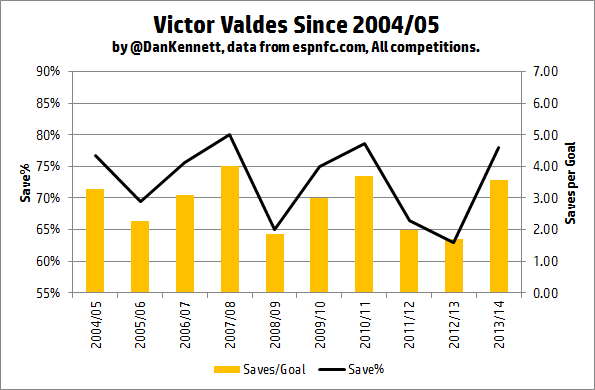 Which is all very nice but it doesn’t really pass the “So What?” test does it? For those who were paying attention in the Statsbomb post, you may have noticed that the average Save% across 48,000 Shots on Target in the top 5 leagues was 72.1%. If we look at the Valdes chart above, he has a lot of seasons where his Save% is above the all-GK average. Is this a prima facie for not signing him because he’s “a poor shot-stopper?” Unfortunately not.

I recently discussed goalkeeping analytics at length with Ben Pugsley and Paul Riley here: AI Analytics Episode 4 (starts around the 25 minute mark). One of the key things that we discussed is the impact of “Team Effects” on Goalkeeping data. Broadly speaking, this is the bias that is introduced to goalkeeping data by a team’s style or managerial instruction. In Barcelona’s case they play a wide open possession game with full backs high up the pitch. The average quality of shot that Valdes would therefore be exposed to is a lot higher than a goalkeeper who plays in a more compact, defensive setup; e.g. you could expect him to face fewer shots and more situations like through balls or one-on-ones, similar to Liverpool in that respect.  (Note: the precise impact of “Team Effects” is not yet known although it will not be long before they are, as members of the football analytics community are assembling large samples of “Expected Goals” and “Expected Saves” data).

To try and put some context around Valdes’s performance I also collected career data for Manuel Neuer, widely acknowledged as the best goalkeeper in the world, plus Pepe Reina and Simon Mignolet. First of all, the data, you can see big sample sizes for each GK with the smallest being Mignolet (on 745 SoT faced).

I’ve put sub-totals for Neuer at Schalke and Bayern, Reina under Benitez, Mignolet at Sunderland and the Rodgers era at Liverpool covering both Reina and Mignolet. The results are extremely interesting: 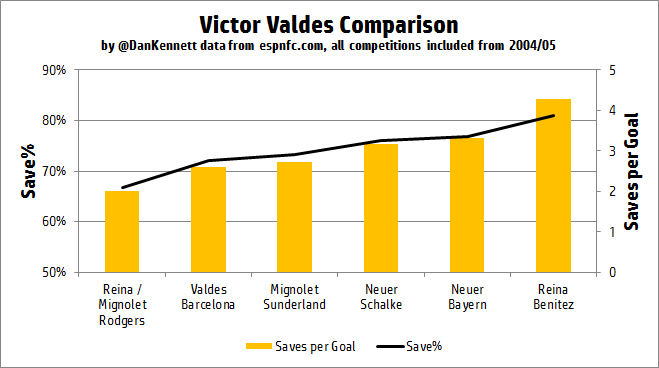 Valdes’s performance doesn’t look great at first glance at least some of this could be explained by ‘team effects’.  Yet his Barcelona performance is a step above that seen throughout the Rodgers era and is just below that seen by Mignolet at Sunderland. Neuer at Bayern remains a step above all.  The real standout is Pepe Reina under Rafa Benítez at Liverpool. To see that level of performance over 5 years and over 900 shots on target faced is incredible. Reina’s numbers are likely to see a small boost from “team effects” (as he played in an exceptional defensive side that was meticulously organised) but this still represents an extended period of elite goalkeeping performance.

So would Victor Valdes improve Liverpool? Before trying to answer that, let’s first make an assumption that Valdes, coming back from ACL surgery, will be no worse for Liverpool than he was at Barca (this is a very risky assumption in my opinion but it’s not unprecedented for a goalkeeper to have a world-class career post-ACL as Oliver Kahn proved. Kahn injured his cruciate in 1995, just his 2nd season at Bayern. One major difference though was that Kahn was 26 when it happened, Valdes is 32).

If we’re expecting Valdes to save more shots than Reina or Mignolet in a Rodgers system it looks feasible, but what does that improvement look like? Rodgers has averaged 3.5 shots on target conceded per game at Liverpool. If we assume assume that Mignolet will continue at current levels and Valdes will perform at Barcelona levels then we could expect Valdes to make 7 more saves over a league season. It’s also possible that Valdes’s improved ‘sweeper keeping’ could prevent a few shots over the course of a season (based on Ice Hockey analysis the hunch would be 2 or 3). Also on the plus side, Valdes is incredibly experienced at the highest level and used to the pressures of a massive club.

However, we do also need to consider the potential negative defensive impact of Valdes when dealing with set-pieces and crosses in the Premier League. Also, if Valdes is going to command a salary closer to Reina’s old level than Mignolet, will the improvement in goalkeeping performance be commensurate with the increased salary? The data certainly doesn’t suggest that Liverpool should be handing out a mega-contract.

Summing up, if Valdes has fully recovered from his ACL surgery and a sensible contract can be agreed it looks a good opportunity for Liverpool to improve the squad and, potentially, the defensive performance of the first team as well.

Dan has supplied some additional analysis for Subscribers only. 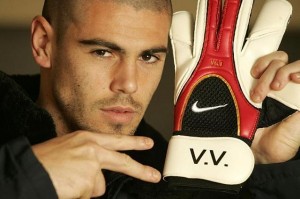