After using 4-2-1-3 for the last few games, Rodgers reverted to the 4-1-2-3 for this game with Lambert handed his first PL start for Liverpool instead of Balotelli. The other change since the Basel game was Lallana returning to the starting XI, while the underperforming Markovic was benched. Johnson returned to the squad after his injury lay-off.

For WBA, the only change from their last two Premier League games was that Wisdom could not play against his parent club, so the Costa Rican Gamboa started instead. Irvine kept his usual 4-2-3-1 formation with Sessegnon just off Berahino. 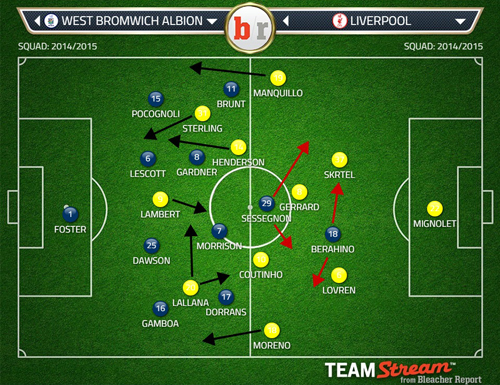 The first half looked very similar to the same period last week against Everton. Liverpool started brightly in both, but then quickly waned due to a combination of certain attacking issues coupled with how well the opposition nullified them. The main contrast came after Liverpool went ahead. Against Everton, they largely dropped deep and played reactively, while here they opted to exploit the space the opponents left them with greater attacking emphasis and quality.

Liverpool started this game very lively – passing crisply and moving with better fluidity than in recent games. This allowed the team to create some nice passing combinations in attack. The team also showed willingness to close down aggressively all over the pitch, something that helped them regain possession, which in turn sustained their attacking flow.

However, bar two crossing chances (one from Gerrard’s indirect free kick in the seventh minute and the other following Lallana’s cross from the right for Lambert, which the striker just failed to connect with) and Sterling’s solo run (the one in the 14th minute when his diagonal run with the ball from the right caused chaos in WBA’s penalty box) Liverpool couldn’t quite capitalise on their bright start. The home side struggled to convert their fine play in that period into good goal-scoring chances from open play. 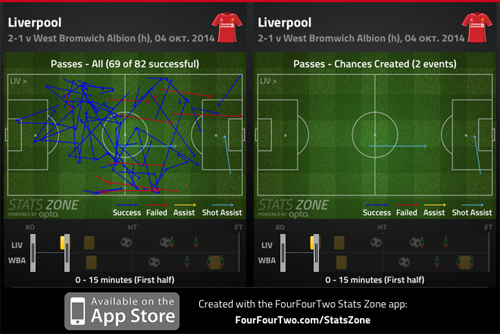 What caught the eye in that period though was the way Henderson and Coutinho performed very distinct roles. Usually – when the team is playing with that 1-2 midfield format – the two of them rotate who should drop towards Gerrard to help with the early build-up and who will step a bit forward to maintain the passing lines higher into midfield. Here both of them performed quite different roles.