The winners of this competition in 2012 (Liverpool) and 2013 (Swansea) meet in the 4th round on Tuesday evening – 8pm kick off UK time – in what will be just the third meeting between the two sides in this tournament. Swansea reached this stage by overcoming Rotherham Utd 1-0 at the Liberty Stadium in round two and had another home tie in round three, knocking out Everton 3-0. 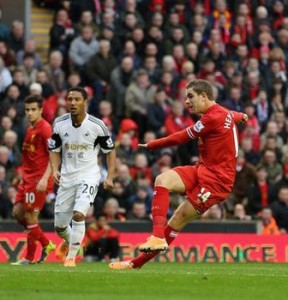 Liverpool of course had the epic penalty shoot-out win over Middlesbrough in round three and will be hoping to settle the tie during normal time considering this will be our third match in the space of nine days. Liverpool and Swansea last met in this competition in 2012/13 with Swansea recording a 3-1 victory at Anfield at the 4th round stage with Chico, Dyer and De Guzman scoring for the Swans, and Luis Suarez scoring for the Reds.

Swansea’s 5-0 victory over Bradford City in the 2013 League Cup final was their first major English domestic trophy win and the first time the League Cup was won by a non-English side.

Pascoe On Swansea, Luis On Brendan, More On Mario