With quite a few players injured or suspended, Rodgers’ starting XI was easy to predict. The key question though was what shape the players would take.

Similarly easy to guess was Dermendjiev’s starting line-up and formation. The only real surprise was the inclusion of Anicet, instead of the expected Espinho, as the captain Dyakov’s partner in midfield. Ludogorets continued with their 4-2-3-1 formation, which eventually looked more like a 4-4-2-0 given the way the team defended. 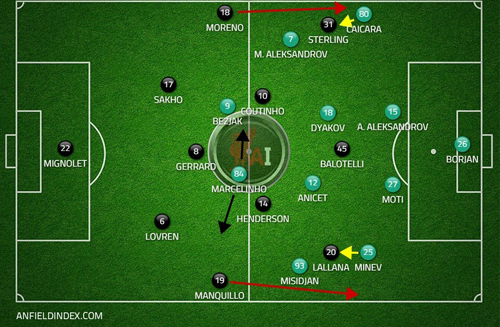 Although Ludogorets impressed on so many levels and Liverpool once again seriously underwhelmed with their overall performance, the game did not really spark from a tactical point of view. There were certain aspects worth discussing in how both teams played throughout, but overall there was little tactical progression as the game was incredibly stale as a tactical clash.

Apart from hitting the post – and not the back of the net – and conceding that cheap mistake to gift Liverpool a penalty at the end, the Bulgarian team performed so well on all fronts that it was barely believable this wasn’t one of the bigger European clubs playing against Liverpool.

Logically, last year’s run in the EL surely positively affected the team in terms of experience and self-confidence. In addition, the team didn’t lose any of their key players in the past three years and have gone on to gradually upgrade their squad and mould their team into a cohesive whole. But still, the reality is this isn’t one of the better European teams by any stretch of the imagination, especially when compared to the likes of Liverpool (not least because Ludogorets’ operational budget is around 100 times – £250m to £2,5m – smaller than the English club). Yet, Ludogorets were impressively competitive at Anfield, displaying that confidence and calmness inherent in the big European teams. If not the main reasons per se, then at least one of the main reasons for this should be searched for in the massive impact their new manager, but long-serving assistant manager, is having on the team.

The first key aspect of Ludogorets’ display was their overall defensive stability, provided by the increased tactical discipline introduced by Dermendjiev and the way he has superbly drilled his team to function when out of possession. The team’s nominal formation remains the 4-2-3-1, but under the new manager – when the players are not asked to press from high up as they would against the domestic opponents – the team transitions into a sort of 4-6-0. At times, it even becomes a 6-4-0 defensive shape with the full-backs tucking in, the wide men dropping deep while the front pair get back to make the side even more solid through the middle.

It wasn’t a surprise that at Anfield, and especially given the way the game started with Liverpool flying out of the blocks, pushing forward and dominating with the ball and in terms of territory, Ludogorets had to defend more often than not. Nevertheless, the team showed it was well prepared and drilled to do that. The two banks of four kept their lines very tight and compact, while the work-rate of the wingers made them invaluable defensive assets in that they continually tracked back Liverpool’s bombing forward full-backs. This left Ludogorets’ full-backs to concentrate on keeping a close eye on Liverpool’s wide men. Interestingly, although both Minev and Caicara repeatedly overlapped down the flanks (more on this later) to offer the important attacking presence within Liverpool’s half, they both managed to largely nullify the expected threat from Sterling and Lallana.

As was the case in the Southampton game at the start of the season, Sterling was closely watched by the opposition’s right-back. Not only this, but similarly to Clyne, Caicara is a player who can match Liverpool’s winger for overall tenacity, pace and general physical built. The result was similar – Caicara had the speed to track back with Sterling or simply dropped quickly back in a position to deny him space to run infield, be it on or off the ball. On the opposite flank, Minev – a two-footed player, who is experienced playing on both sides – did something similar to Lallana. Either he stuck tight, preventing him receiving the ball, or when the former Southampton captain did so, Minev was quick to close him down, not leaving him too much space or time on the ball to do anything. It was only when he opted to drop very deep or make long lateral runs towards the opposite side that Lallana managed to escape Minev’s close attention. 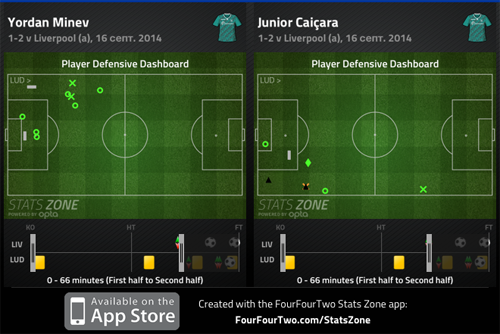 Meanwhile, with Marcelinho and Bezjak often getting goal-side of Henderson and Coutinho (and not Gerrard and the centre-backs), the visitors gained extra compactness through the middle. This and the way the wingers keenly dropped back too, minimised the space the midfield pair had to cover between the lines, making their life so much easier. As such, it was often a case of Dyakov dropping near the centre-backs, offering them an extra layer of protection, while Anicet stayed a bit higher and used his mobility and aggression to close down around. 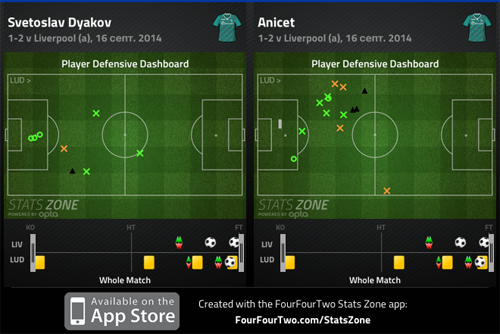 For all their superb defensive organisation and the way they kept their discipline and concentration intact (all traits positively influenced by Dermendjiev’s appointment), Ludogorets impressed also with their behaviour when in possession.