With so many players unavailable, Liverpool’s XI was rather predictable, even if it was surprising to see Sterling benched (although, arguably it was the right thing to do with him playing full games in the past month or so without any break for club and nation). The exact starting shape was harder to guess though.

After starting with a 4-2-1-3, 4-1-2-3, and the 4-diamond-2 formation in the last three games respectively, Rodgers decided to give the first one another go. This time it was Henderson partnering Gerrard in the midfield duo with Lallana (left) and Markovic (right) flanking Coutinho in the band of three behind Balotelli.

For Villa, Lambert kept faith with the 4-1-2-3/4-1-4-1 formation he deployed up to now. With Vlaar unable to feature due to injury – and replaced by Baker – the only unenforced change was that the new loan signing Cleverley replacing N’Zogbia in the starting XI (most probably due to Lambert not trusting the tricky winger to offer the kind of defensive discipline against the marauding Moreno). As a result, there were a few positional switches – Cleverley alongside Delph ahead of the deep-staying Westwood, with Richardson now moved to the left and Weimann going down the right flank. 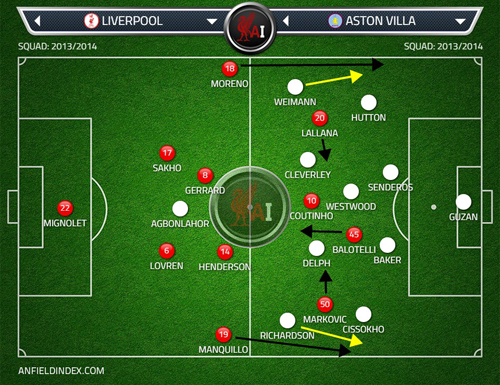 The simplest way to describe this game is to say it was an exercise of attack against defence. Moreover, as is often the case in the EPL, the defence not only blunted the attack and kept a clean sheet, but also ended up winning the game. However, on a more detailed level – as is more often than not the case in such clashes – it was the struggles of the attacking team, rather than the overall efficiency of the defending team, that influenced the result to a larger degree. For all Villa’s good and at times even brilliant defending, Liverpool could not really provide anyway near the required attacking vigour and fluidity to at least hope for a much higher chance to open Villa’s defence on a more regular basis.

Rodgers’ starting XI was theoretically able to line-up in no less than three different formations. The first one was a 4-1-2-3 with Coutinho and Henderson ahead of Gerrard in midfield with Lallana and Markovic flanking Balotelli up front. The second variant was to see the Reds start in the actual 4-2-1-3 manner with Coutinho ahead of the Gerrard-Henderson double pivot. The final, and perhaps least probable but still possible, alternative was to see sort of 4-2-2-2 with Coutinho (left) and Lallana (right) in-cutting off the flanks with Markovic given a free role just off Balotelli.

Each of these three options theoretically would have been suitable thanks to their own different set of positives and the overall benefit provided by how exactly the players might have lined-up. To focus on what Rodgers actually chose as his starting system, it could be argued that Liverpool’s manager thought the 4-2-1-3 variant is the best of both worlds – fluid enough in attack while retaining a solid enough midfield base (Henderson’s energy and mobility complementing Gerrard’s notorious shortcomings) as it was equally unclear how precisely Lambert would approach the game. There was the possibility to see Villa lining up in a sort of 4-1-3-2, which would have made leaving Gerrard on his own ahead of the back four too much of a risk, for both defensive reasons, with him being easily overrun with Delph and Cleverley pushing either side of him in addition to Weimann and Agbonlahor playing 2-v-2 with Sakho and Lovren, and offensive reasons with the risk of seeing Gerrard being marked out or at least closed down, something that cut off the vital link in possession between the back four and the front five.

As a whole, Liverpool’s starting formation with those personnel was the middle ground between having enough firepower to put Villa’s defence on the edge while having the complementing midfield pair and aggressive back four to guard against their potential attacking strengths.

The way Liverpool started the game revealed Rodgers’ presumable thinking about how his team should be pragmatic without looking too cautious. The deep-staying double pivot provided enough positional cover and plenty of passing options to play out from the back and build-up the play gradually higher up the pitch. Meanwhile, the full-backs were very quick to advance forward and get ahead of the play. With Moreno and Manquillo actively stretching the play, both Lallana and Markovic were allowed to move infield and influence the play between the lines.

Early on, there was a couple of situations showing the attacking potential of this system. First, the ball was worked nicely down the left channel, to then reach the bombing-forward Moreno on the outside who was quick to swing in a great cross for the unmarked Markovic on the far side – the Serbian’s volley went off target though. Minutes later, in the sixth minute, after patient recycling from the back, one of the pivot midfielders – Henderson – provided the long pass from deep, finding Markovic who had now moved into a central position. He was quick to head the ball down the right flank for the overlapping Manquillo, who similarly to Moreno, provided a well-drilled cross into the box. Again it was  Markovic, arriving from deep, who met the cross, but his header went off target once more (arguably he should’ve left the ball for Balotelli who seemed in a better position to strike a more accurate shot on goal just behind him).

In that spell at the start of the game, Liverpool’s formation worked well enough in attack with the ball being quickly sent down the channels (after a spell of passing it around in deeper areas to allow the front six players to occupy positions deeper in the opposition’s half) for the full-backs to work in the final third, as well as then interchanging with the in-cutting wide-men and the roaming around Balotelli. This strategy always left one of them in a good attacking position, poorly marked or completely unmarked.

Then, a simple ball from deep by Hutton caught Sakho up against Agbonlahor. The French defender failed to clear the danger assertively and conceded a cheap corner after being very close to letting Villa’s forward get past him into the penalty area. Following that corner, the visitors got their goal.