It’s hard to know what to make of the impending season, with predictions seeming harder than ever. Between 2005 and 2010 you pretty much knew who would comprise the top four, with managerial stability at every big club bar Chelsea, and they had by far the most money. It now seems more open at the top than it has for a very long time, even if the league, beyond that, is mediocre at best.

It’s incredibly easy to pick who the top seven are likely to be – you’d almost certainly be able to name six of them now – and you’d expect the three clubs whose squads are approximately twice as expensive as everyone else’s (Chelsea, Man City and Man United) to fill three of the top four spaces; not least as all three now have proven, experienced managers, and are no longer experimenting with mid-level bosses promoted above their stations.

After last season, some Liverpool fans are naturally expecting a title challenge, but many in the media seem to think 5th place is more likely. Obviously the loss of Luis Suarez turns the Reds, in the eyes of some outsiders, from a one-man team to eleven also-rans. Obviously I disagree with this, as the team’s form without Suarez was generally very good. Three seasons ago, Arsenal were seen as a one-man team with Robin van Persie, but since his departure have fared no worse without him (although United won the league with him in 2013).

We still don’t know if a top-class replacement (of sorts) will be sought for Suarez, or if money will be spent on further strengthening the defence (a tick so far), adding yet more squad depth (another tick) and bringing more variety into the mix (one further tick). The squad feels bigger and better, with the bench almost certainly much stronger than last season, but it remains to be seen if the new buys can actually improve upon an XI that now lacks its star player. 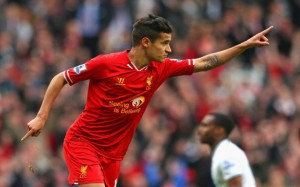 The King has gone to Barca. Long live the King.

In the past three seasons, both Chelsea and Manchester United, perennials in the top three, have fallen to 6th or lower (albeit when winning the Champions League in the case of the Londoners). In 2010 Liverpool dropped from 2nd to 7th, after five largely excellent seasons in Europe and one genuine title challenge. A change in manager, or financial uncertainty, seemed behind those falls, with Chelsea’s league form also partly sacrificed for Champions League glory, much like Liverpool in 2005.

Arsenal continue to have dramatic swings within seasons, but still seem to end up 4th. And yet they are the only big club to have not finished outside the top four in recent seasons, having been there for almost 20 years now. If Liverpool were seen to have collapsed at the end of last season, it’s worth remembering that the Gunners spent the longest time at the top of the table, and yet had a really dismal spring.

Spurs, meanwhile, had a brief spell in the top four a few years ago under Harry Redknapp, and will surely be more competitive this season after the mess of 2013/14, with at least some of last summer’s signings – particularly Erik Lamela – likely to come good after a period to settle in. They do seem stuck in the Europa quicksand, mind, where you expend a lot of energy for little reward.

Then there’s Everton, who went fairly close to finishing 4th last season, but despite their best points tally in decades, still finished seven points adrift of Arsenal. I think the first thing we can confidently say is that they won’t finish any higher than 5th, especially with added Europa drag. They found the money to secure Lakuku’s signature, for £28m (virtually doubling their previous record), but they’ve essentially spent a lot of cash just to keep last year’s team of loanees together, minus the precocious Gerard Deulofeu. The Toffees have once again loaned a promising young player, this time bringing in Christian Atsu from Lukuka’s former owners, Chelsea. They’re a club that’s heading in the right direction, but others appear to be strengthening at a greater pace, as they merely fight to stand their ground.

So not only is it quite hard to forecast how Liverpool will react to increased expectations, as well as the loss of Suarez, it seems set to be an even more competitive top seven – unless there’s an unforeseen collapse from one of the big guns. It’s incredible to think that Arsenal won more games (24), and finished with more points (79), than they did when winning the title in 1998, yet only finished 4th.

Having said all that, in the article that follows I will attempt to make sense of the Reds’ chances and how the new players might bed in.