Unsurprisingly Liverpool lined-up with the same XI and roughly the same 4-2-1-3 shape as they did in their last pre-season game against Dortmund. The only surprise was to see Lucas starting the game instead of either Can or Allen, with both sitting on the bench.

For Southampton, Koeman went with his expected starting XI with four (Forster, Bertrand, Tadic, Pelle) of his summer transfers starting, and two others (Taider and Long) sitting on the bench. Had the new centre-back Gardos been fit too, that number would have been higher. In terms of formation, the new Saints’ manager switched to 4-2-1-3, seemingly to offer greater defensive protection for the back four. Interestingly though, it was Davis and not Ward-Prowse who started on the right flank. 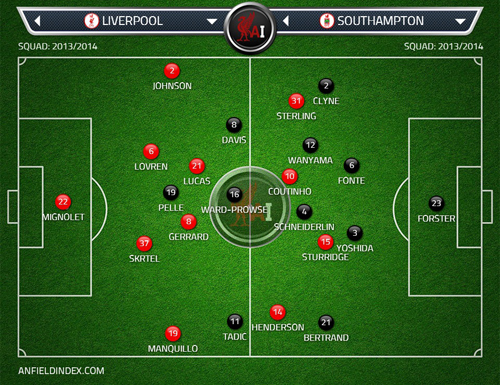 Obviously the result was great for Liverpool, as given the tough next two games the three points here were absolutely vital. But the performance was close to being all-round terrible, with massive attacking and defensive issues shown in the two halves respectively. For Koeman and his players the result is the only source of disappointment, as they should be delighted with the way they performed in the two halves – starting cautiously to deny Liverpool any chances in the first half, before successfully switching to a more attacking style that put the hosts to the sword for the majority of the second half.

It was clear the visitors wouldn’t start the game pressing deep in the opposition’s half and play quick and positive football right from the start, as Pochettino’s Southampton would have done, but with the change of the manager there was always going to be a shift – be it subtle or more obvious – in the team’s overall tactical behaviour. Koeman’s greater pragmatism shone through in how he set up his team from the start.

The first thing that made an impression was that the Dutch manager flipped his midfield triangle to 2-1, after playing all of the summer friendlies with the 1-2 variant. Obviously this move was designed to offer greater positional cover between the lines. Perhaps attending the Liverpool – Dortmund game, Koeman thought this would be the closest approach Rodgers would use in terms of formation, personnel and starting strategy in this game. So the Dutchman was keen to take certain measures to prevent his team leaving the likes of Coutinho, Henderson and Sterling pulling the strings for Liverpool in that zone.

The double pivot of Wanyama and Schneiderlin was the key to stopping Liverpool in that zone. The Kenyan was assigned with personal duties to stick close to Coutinho and never give him too much space to either receive the ball or pick out his trademark penetrative passes. Meanwhile, the Frenchman was tasked with a covering role, always looking to remain in position ahead of the back four but also close enough to his partner to offer a helping hand in case Coutinho would beat him. This meant not only was Liverpool’s main creative player largely taken out of the game, but there was little space vacated for the others to sneak into in case Coutinho would at least successfully pull his marker out of position. In any given moment Wanyama was breathing down the Brazilian’s neck, while Schneiderlin used his mobility, energy and physicality to both patrol the zone ahead of the back four and keep an eye on his partner, ready to cover for him. 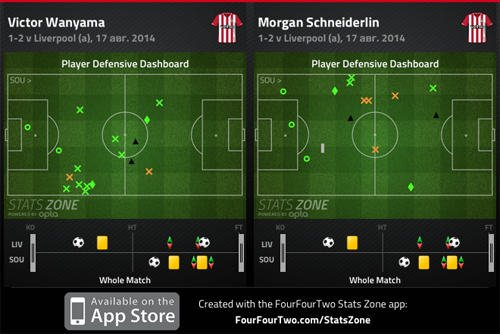 However, while the above could be said is just basic tactical sense and nothing too revolutionary in how a manager should aim to both restrict the opposition’s #10 and still have enough cover between the lines, the way the rest of the Southampton players were assigned defensively was the really impressive aspect, showing Koeman’s tactical nous.