The 2013-14 season in a nutshell? As much disappointment as satisfaction. I don’t need to remind anyone of the pain of Liverpool being so close to securing their 19th league title but missing out on it.

The most pleasing aspect was that Liverpool were back up there, going toe-to-toe with the big boys in a title hunt, and ultimately securing the Champions League spot they so craved.

However, beneath the main narrative of last season are hiding many sub-plots which portray the true nature of how and why the team performed the way they did. To keep up with the general description of the season, there were plenty of positive stories which feed your optimism for the future. But there were also many negative stories, which keep you grounded by raising your doubts and pessimism. In a way this is the perfect equilibrium – for every ‘right’ there was a ‘wrong’ and vice-versa (no matter the sphere – tactics, transfers, results, performances, etc.).

Talk of balance between the good and bad of how the whole team (manager and players) fared last season may sound strange, to say the least, given the great achievement of leaping from 7th to 2nd position, an outright Champions League qualification secured, and a title challenge that lived on until the last day of the season. But to try and truly grasp what precisely happened, and perhaps more importantly why it happened, one should strip out all emotions and try not to float on the surface of any narrative but delve deeper and seek to ask precise questions in order to receive accurate answers.

Were Liverpool really that good? Did everything happen due to their own efforts, or was it a case, in a true fairytale-style, of being miraculously helped by a ‘higher power’ more often than not? Was the team’s overall performance solid enough to be built on it for the long-term? Was the way the team achieved what they did sustainable or not? Should the management simply try to recreate last season by doing the same things in the same way and hoping it would yield the same effect and results? Could it be so simple, and have the same effect again? Can they focus on the good aspects while disregarding the bad and hope that a ‘positive’ attitude will mask any potential set-backs and cover any long-term key weaknesses?

End result vs quality of performance

Everything in football is cyclical, from the current ‘flavour of the month’ formation and tactics, through the way the players’ skills and roles are changing, with some of them seemingly outdated only to  once again become perceived as the desirable way to run your club.

But there is one thing that never has and never will change, no matter what year and era the football is played in, it is the never-ending debate between the pragmatists and the purists about what matters most. It remains one of football’s invariables, a true bastion of consistency and persistency. The eternal argument about how the game should be played – to win at all costs or to perform as best as possible? Is it the result or the joy of the game?

Each ‘school of thought’ has its hardcore supporters and it’s really hard to say who has the edge in terms of quantity, if not quality per se. There is a small group of neutrals which see the good and bad in both sides, but most importantly are capable of understanding (perhaps in contrast to the dedicated fanatics of either school of thought) that the two aspects are interlinked. Obviously, you can play well and yet lose. Or you can’t play really badly and still be the winner at the end of the game. But if you want to win consistently over the long-term, you can’t do it any other way than trying to perform as well as possible in every single game.

There is no ‘positive’ correlation between results and performances. On an individual basis (i.e. individual games) you can justify the performance by the result – ‘We won, and that’s all that matters’. But if you disregard the performance you can’t say that just because you won today, you’ll do the same tomorrow. If you play badly in ten games you’re bound (at least you stand a chance) to win a couple of them based on pure chance and the law of probabilities. But over the long-term playing badly always correlates to losing (or at least not winning enough games to achieve anything meaningful, even if this means just escaping relegation). Put simply, playing badly increases your chances of losing and reduces your chances of winning.

On the other hand, there was always a very strong connection between performances (how you play) and results (whether you’re winning or losing). The better you perform (especially over the long-term), the higher the chance of you winning most of your games. And most importantly, your winning won’t be due to chance or the law of probabilities. It’ll be fully deserved because the better you play the more likely you are to outplay the opposition. Outplaying your opponent is the single strongest reason why one team deserves (and more often than not will go on to) win the game.

So, all this means that, instead of wasting your time arguing about how we judge a game (to simply win or to simply perform), you should be really thinking about how to do both. There is no such thing as playing perfectly (at least in practical terms) apart from some very rare games in a whole season. But the only way you’re guaranteed a drastically better chance to continue winning more often than not is if you strive for this imaginary perfection. The better you play, the easier it’ll be for you to outplay the opposition which, more often than not, is likely to give you the win.

With all this in mind it could be argued (if not outright safely concluded) that over long-term the quality and level of a team’s performances are a better indicator for sustainability and probability of future success than past results. Following this it’s worth asking whether the widely accepted agenda that the best way to judge the manager’s work and success is to view his results is at best ‘half-true’, if not wrong per se.

Of course, the correlation between performances and results means the ‘end game’ is about results and this is what you should judge your manager on (more so if you have the third vital ingredient of a sufficient time frame in the sample size). However, focusing only on the end product (i.e. the results) is not going to be adequate and objective enough, especially in the short-term where results could suffer even if the quality of the performances is sufficient. This is because, while there is also a strong correlation between the performance levels and the success of the results, it’s also true that there are many other variables determining the outcome of a football game (including the opposition and how they perform, the referees, and last but not least ‘Lady Luck’).

From these four main factors determining  how any match will play out, your team and manager could control only one. Unless you bribe the opposition and the referees these two factors are way outside of your control. And although it can be argued that each team creates its own luck and that ‘fortune favours the brave’, it’s undeniable that ‘Lady Luck’ has a random impact on football matches. As much as the ‘higher power’ of luck can help you win a game, it could equally destroy your chances to compete.

This means that it’s highly unfair to judge your manager on results alone, given he is able to control only one of the four decisive factors capable of determining the outcome in each game. You can’t really hold him accountable for how the opposition, the referees or luck impact on certain game. Sometimes it could be a case of your team playing brilliantly, but the opposition playing even better and winning the game. Other times it would be a case of your team playing badly, but the referee or luck gifting you the win even if the opposition fully deserve something out of the game (or vice-versa when your team is unfairly denied the three points). As a result you should only judge him on what is indeed within his power to control, managing and playing a vital role in whether the team is performing well or not – i.e. his team’s performances tactically, technically, motivation and fitness-wise. Following this, evaluating and assessing your team’s performances (or at the very least, the results in relation to the performance and not simply the results in isolation) seems more important than simply evaluating where they finished in the league table and using it as the main measurement to label the season either a successful or unsuccessful one. It’s possible that finishing second or eighth in the table could be equally undeserved finishes (but in different ways and for different reasons). Therefore instead of over-simplistic reactions to label the one a total success and the other total failure, you should really delve deeper and analyse the situation in much greater detail. This is because, in contrast to their results, how each of the team’s performances as a whole panned out could in reality mean that the team finishing second could as easily have finished fifth, and the other team which finished eight may as easily have finished fourth.

Liverpool’s fans have always prided themselves on being intelligent people with a sound understanding of the game. And while it’s true that every fan base has its own fair share of idiots, it’s true that the Kopites are among some of the most knowledgeable fans world-wide. You have to look no further than last season and the ‘Poetry in motion’ song that was very quickly devised and accepted as the story of the season. In just three words (but with enormous depths of meaning) it captured all that was good in how the team performed and the way they won some of their games. However, what that phrase does not capture and acknowledge is the times when the team was far from ‘poetry in motion’ and closеr to ‘mumbling and stumbling’. This article aims to fill that gap by going through how and why there were occasions when Liverpool struggled, and demonstrating how this happened as often as the team were indeed poetry in motion. 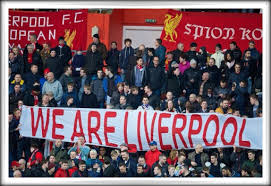