On June 5th Liverpool FC announced they have agreed a deal in principle with Bayer Leverkusen to sign 20-year-old midfielder Emre Can, and today completed the transfer, for a fee reported to be about £10.5m. Can follows Rickie Lambert and Adam Lallana to Anfield during the current transfer window as Brendan Rodgers fine-tunes his squad for Champions League football in 2014-15.

Upon sealing the switch to Anfield, the 20-year-old said:

“I am proud to be a part of the family and I am looking forward to playing here. I will give it my best.

“You automatically follow Liverpool when watching the Premier League. LFC is a great club and the fans are amongst the best in the world. I am looking forward to the first game and can’t wait to step on the pitch for the first time at Anfield.”

You can watch Emre Can’s first interview in full here.

A German youth international who can play centre-back and left-back as well as in midfield, the Frankfurt-born midfielder made 29 Bundesliga appearances last season, scoring three goals.

Can clocked up seven appearances in Europe’s elite competition during 2013-14, and has previously played at the European U21 Championship and the U17 World Cup.

Brendan Rodgers is thoroughly looking forward to the chance to further nurture the ‘exciting young talent’ of Emre Can, and shared his delight with Can’s decision to continue his development at Anfield, where numerous talented youngsters have thrived under Rodgers’ tuition in the past two seasons.

“Emre is an exciting young talent and I’m delighted he’s chosen Liverpool for the next phase of his development and growth as a player,” Rodgers told Liverpoolfc.com.

“He has recognised that we are a club that improves and nurtures exciting, ambitious players and I’m looking forward to seeing him take those next steps forward for us.”

The versatile midfielder featured in Europe’s elite club competition for Leverkusen last season and the boss revealed that he has personally been following the player’s progress for some time.

Rodgers added: “We have tracked his progress for some time and I have been impressed with his attitude and qualities when I have seen him play both in the German Bundesliga and the Champions League.

“He has many of the attributes we look for; charisma on the football pitch and courage to want the ball and make things happen.” 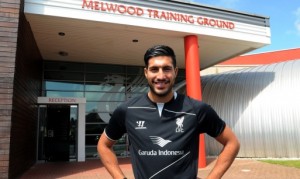 Just a pronunciation note – as Can is of Turkish origin, his surname uses that mysterious Turkish ‘c’ sound at the start, which ends up sounding more like a ‘ch’ – it ends up being Chan – but definitely not the thing baked beans come in! 😉

Here are some comments that have already appeared on TTT, followed by some edited official site material.

First, Vin posted this YouTube footage of Can playing for Bayer Leverkusen last season. Have a look –Daniel Rhodes did, and was then worried about whether he’d been YouTubed?:

Having just spent 21 minutes watching YouTube clips I’m in the perfect position to make an educated, considered and most of all, thorough, evaluation of his ability.

Tell me what Barkley can do that Can can’t? Other than the odd worldy goal.

Driving runs from midfield? Great in the air? Strong as an ox? Both-footed? Can play left-back? Plays it simple when he needs to but has the courage to try the risky pass as well? Pace? Strong in the tackle? Seems competent from dead ball situations? Skillful?

Am I missing something?

My only worry is that he seems to be blessed (cursed) with the ability to play pretty much anywhere on the field. Whilst this is beneficial to the team, it can be detrimental to a player. Jamie Carragher was one who was thrown on the field wherever there was a gap, and it wasn’t until he settled down in one position that everyone realised how good he was. I really hope that Rodgers has a role in mind for him and not just as a player to fill in gaps where required.

If you wanted an Emre Can analysis from StatsBomb, Yathaid showed you where to get it: http://www.statsbomb.com/2014/06/transfer-dossier-welcome-to-anfield-emre-can/.

This player profile is for Subscribers only.