When an ex-Liverpool manager takes charge of half a dozen Liverpool players in a group containing current and ex-Liverpool players, then international football has more meaning for this website. This is, after all, a site dedicated to discussing Liverpool FC, although we will wander off topic now and then.

Suddenly, it seems, the players who were good enough to help Liverpool win 26 out of 38 games (68%) last season are part of the country’s problem? So, I just don’t buy that. For starters, Jordan Henderson excelled against many of the midfielders who are now in Brazil, when used in the right way. (And that wasn’t as part of a midfield two.)

Around one-third of Premier League footballers are English. While this is a low number, it’s still an incredibly large pool from which to choose. And it’s not as if Liverpool, Manchester United, Arsenal, Chelsea, Everton, Spurs, Southampton and Manchester City, who comprised last season’s top eight (by some distance from the rest, it must be noted) don’t regularly field English players. Other clubs do, too, but every outfield England player played for one of these eight teams. (Yes, it’s another issue that English players rarely go abroad to learn new things, but that’s a cultural problem that dates back a long way, and is not new to 2014.)

Equally, it’s not as if English defenders never get to test themselves against the types of elusive, quicksilver skill-gods that light up World Cups. They play against Suarez, Aguero and many others, with many of them having also faced up to Ronaldo, Robben, Bale and various other top players to have passed through our league. And, of course, in the case of some English defenders, playing against Messi, Ronaldo, Neymar, et al, in the Champions League.

Here’s the thing that bugs me about Roy Hodgson’s excuses. The Premier League contains many of the world’s best attacking/creative players, right? Spain clearly has a greater number of the very best – it certainly has Messi, Neymar, Iniesta and Ronaldo – but if you look at it another way round, most people will agree, if asked, that the best attacking/creative players in the Premier League are foreign. In some ways it stands to reason; the best 20 homegrown players in any country will not be as good as the best 20 selected from outside of that country, as most nations have populations lower than 1% of the world’s total (England certainly does, at around 0.8%).

We know that only about one-third of top-flight players are English, therefore, given that foreign attackers are believed to be better, you wouldn’t expect as many as one-third of the top goalscorers and goal-creators to be English. After all, England failed in Brazil, according to some observers, because of a lack of talent.

Meanwhile, as pointed out in TTT’s comments section by Andrew Beasley, the fact is that Steven Gerrard, Rickie Lambert and Wayne Rooney had more league assists than anyone bar Luis Suarez in 2013/14. That’s three of the top four assist-makers and two of the top five goalscorers in Brazil with England.

If rounding it out to a top five in both criteria, 40% of the top goalscorers and 60% of the top assisters are English, which is far greater than the approximate 33% of English players to choose from. Therefore, in the Premier League at least, a greater than expected proportion of the elite players (in terms of goals scored and created last season) were English, heading to Brazil in fine form. Ergo, the attacking talent was there. 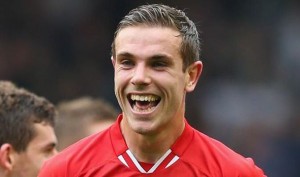 Now, we can turn around and say that international football is different, and of course it is. It may in some ways be harder, but equally, Uruguay’s reserve centre-back in Brazil is deemed no better than Liverpool’s current 5th-choice. And it’s not like Italy had Gianluigi Buffon in goal, and the legendary centre-backs of yore; they had Salvatore Sirigu between the sticks and fielded ex-5th choice Liverpool centre-back Gabriel Paletta (who has matured well, and, like Coates, was harshly written off as a slow youngster, but is still obviously no Baresi or Maldini).

International football is probably harder, but then Milan Baros had a world-class scoring rate with the Czechs and ditto Robbie Keane with Ireland, and yet neither was prolific at Liverpool. The same with Peter Crouch, who scored far more frequently in an England shirt than he ever did in domestic football. In terms of exchangeable currency between the Premier League and international competition, I’ve no idea how goalscoring translates, because half the time it seems to make no sense. It tells us that Miroslav Klose is the equal of Brazil’s sensational Ronaldo, and that Baros is better than Messi, and that Jan Koller was better than both.

People talk about poor old Roy not having quality centre-backs to choose from, but he picked one who’d won the Champions League with Chelsea, and one from Everton, who had the 3rd-best defence last season; along with Manchester City’s title-winning keeper. And as noted, Coates and Paletta, who both had game time against England, are not exactly world-class, are they?

As I noted the other day, it’s fair to say that England do not have outstanding 7th and 8th choice players in certain positions. But unless you have an injury crisis, does that matter? Of the eight top-scoring Englishmen in last season’s Premier League, only Jay Rodriguez was unavailable for selection. England did not travel without any of its best players due to injury, bar Rodriguez (based on last season’s form), and the hot-and-cold Theo Walcott. It’s not like they had to rely on a ton of back-ups.

What irks me is that Liverpool fans are still seen as having it in for Hodgson, when, in truth, we just don’t rate him, and for good reason (which lasted six long months). This doesn’t mean that everything that went wrong in Brazil is his fault, or that England should be expected to go beyond the quarter-finals.

But should the country be shrugging its shoulders after losing two out of two, against good sides – but ones who were not tournament favourites?

Every coach will tell you that organising a team at the back, with four protective midfielders, is the easiest thing to do. But what else has Hodgson – who, in fairness, is a master at the art – ever done at the sharp end of meaningful leagues?

His Fulham side were one of the best organised sides I’ve ever seen at Anfield (without trying to cross the halfway line), but he’s not had a job where he has won more than half his games since the 1980s. People talk about other ‘defensive’ coaches like Mourinho and Benítez, and while they’ve masterminded a few sterile 0-0s in their time, they win things wherever they go, and certainly win more than half their games, no matter who they manage. By contrast, Hodgson, and David Moyes (as seen throughout last season), lack the imagination to make good teams better. They can’t bring about the necessary kind of movement in the final third.

The system that gets decent results with limited players does not work when more is asked of it. I’d bet both my lungs that United aren’t as ponderous this season, even before introducing new players; just as Everton played better, and won more points, under Roberto Martinez – in his first attempt – than they did under 11 seasons of Moyes. Time is seen as the answer for Hodgson, but Martinez did not need it; and England’s results are deteriorating, not getting better. So how is time helping? Did those extra months improve things for Moyes at United?

As I noted the other day, average Hodgson’s win percentages from Blackburn (three years after they were champions and still with a big war chest), Inter Milan, Udinese and Liverpool and it’s a measly 40%. Add the England job and it’s up to 42% spread across five big-to-very-big jobs, which is roughly how good Graeme Souness was as Liverpool manager. Yes, that impressive.

Ultimately, the good news is that Hodgson – with his four decades of organisation – is nowhere near Liverpool FC (bar misusing its players this summer), and in Brendan Rodgers we have someone with the ability to inspire top players, not merely tie them up in rigid systems.