The same six words that describe how I still feel about last season:

I didn’t want it to end.

Published barely a month after the season’s climax, and edited by Karl Matchett, Poetry in Motion is an ebulliently-written recap of a madcap season, interspersing chronologically-ordered sections with thematic chapters. 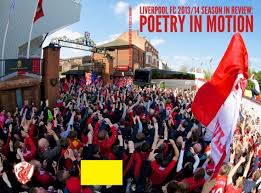 In those times, Shankly’s dictum that ‘second is nothing’ would have been used to bash the players, the managers, the owners, other fans and anyone else.

Yet the opposite has been the case since May, amongst all but the arlest of arlarses and the most inglorious of glory-hunters. There is a palpable, straining impatience for the day in August when we get to ‘go again’.

The picture last summer was different. As Simon Steers points out in the opening chapter, once Suarez had been secured by John W. Henry cutting through the haze and taking a piss in Arsenal’s bong-water, the club presented a united, ambitious front. The owners, manager and players all talked up their chances of success.

Many supporters were more circumspect. Yes, we had a young squad, and some very good players, but it was thin. We had kept hold of Suarez, but failed to seal the deal on a number of other top-level players. Rodgers increasingly looked and sounded like a Liverpool manager, but his CV was modest, to put it politely. Champions League is ‘where we belong’, but the previous season we had only landed seventh and were some way off from even challenging for the top four.

These concerns, these hesitations, these checks and balances on our ambitions, faded away as the combining coaching of Rodgers and Dr. Peters – covering Brendan’s famous four areas of technical, tactical, physical and mental preparation – took effect.

As the fans sloughed off their nervousness and the club became more assertive in its determination to challenge for honours, a feeling returned to club. It was “the restoration of hope for supporters”. 2013/14 went from the anticipated – and dreaded – transitional season to a “transformational” one, as Steers puts it.

An early omen that this might be a special year was the club’s pre-season tour including the game at Melbourne Cricket Ground, as detailed in Chapter 4. I sent copies of the book to a few of my family and they were struck, like I was, by the revelation that Australian sports fans don’t really sing at games.

That makes the raucously delivered performance of ‘You’ll Never Walk Alone’ at the citadel of antipodean sport all the more special. We can deride pre-season tours as glorified marketing campaigns, because that’s what they are, but even Steven Gerrard will have never heard close on 100,000 people singing our anthem.