Brendan Rodgers’ Red Scoring Machine marches on. In smashing six goals past Cardiff City on Saturday, we’ve set a new club record in the Premier League for the most goals scored in a season (82) with eight games remaining. The final goal of that 6-3 win over the Bluebirds was Liverpool’s 153rd league goal in what was Rodgers’ 68th league game as Reds manager, making him the LFC manager to reach 150 goals quickest in the top flight. Rodgers’ record breakers weren’t finished there. The six goals against Cardiff made it the first time in our top flight history that we’ve scored five league goals or more away from home three times in the same season (stats courtesy of club statistician Ged Rea). 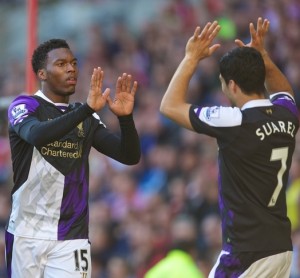 Liverpool return to Anfield for the first time in over a month when we host Gus Poyet’s Sunderland on Wednesday evening – 8pm kick off UK time – and the Reds will be hoping to make it seven wins in a row (and more importantly move to within one point of leaders Chelsea) with victory over the Black Cats. In the corresponding fixture last season Liverpool recorded a 3-0 victory thanks to a brace from Luis Suarez and a Raheem Sterling strike. Liverpool secured a 3-1 victory over Sunderland at the Stadium of Light back in September when Kevin Ball was caretaker manager following Paolo Di Canio’s dismissal. Daniel Sturridge gave us the lead after 28 minutes and twice set up Luis Suarez (on 36 and 89 minutes), with Sunderland’s only goal coming from Giaccherini on 52 minutes, either side of Suarez’s brace. Suarez is already our most prolific scorer and overall 5th highest scorer against Sunderland with seven goals scored in just six appearances.

The Black Cats currently occupy 18th place, three points adrift of safety with two games in hand over the majority of the teams above them. They began the season poorly, picking up just one point from their first eight league games (a 1-1 draw away at Southampton) with Poyet eventually named as Di Canio’s successor on October 8. Poyet picked up two wins in his first four league games in charge – 2-1 against Newcastle and 1-0 against Man City both at home – and the Black Cats produced their best spell of the season from mid-December to early Feb where they won four, drew four and lost one, moving them as high as 14th in the table. Their last four league games however have seen them lose three times (0-2 at home to Hull, 1-4 away at Arsenal, 0-2 away at Norwich) and draw one (0-0 at home to Crystal Palace), which has seen them dragged into the battle for Premier League survival.