Liverpool suffered their first defeat of 2014 on Sunday – going down 1-2 to Arsenal at the Emirates in the FA Cup – but in the Premier League the Reds are arguably the in-form team right now, with only Chelsea matching our points tally over the last six games (14 from a possible 18). We’ve won five and drawn two of our last seven league games since the turn of the year – scoring 22 and conceding nine – which has left us four points behind the current leaders Chelsea, three above Spurs in 5th, eight above Everton in 6th (although they do have a game in hand) and a delicious 11 points above Manchester Utd in 7th (who don’t have any games in hand).

Swansea City are our next opponents at Anfield on Sunday – 1.30pm kick off UK time – and with the Reds having won 11 of the 13 league games played at L4 this season (the joint highest in the top flight), scored 38 (the 2nd highest in the division) and conceded just nine (the joint second lowest), Garry Monk’s side will be hoping to avoid a similar score to that which befell the now departed Michael Laudrup’s team in the corresponding fixture last season: 5-0.

The Swans currently sit in 10th place with 28 points – four points above the relegation zone – and are unbeaten in their last two league games, securing a 3-0 home win over Cardiff City in Monk’s first game in charge and drawing 1-1 with Stoke City at the Britannia Stadium, prior to being knocked out of the 5th round of the FA Cup by Everton. Swansea have won two of their last 12 league games (drawing four and losing six) but of those 12 games, five of them have been against teams currently in the top seven, with the Swans losing all five of those matches: 1-2 to Everton at home, 0-1 to Chelsea away, 2-3 to Manchester City at home, 0-2 to Manchester Utd away and 1-3 to Tottenham at home. 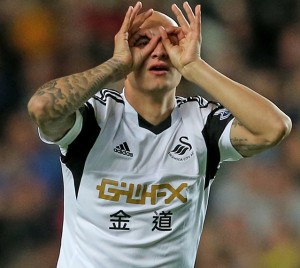 The two sides drew 2-2 at the Liberty Stadium earlier in the season with former Red Jonjo Shelvey giving the Swans the lead after two minutes. Shelvey then became confused as to which team he was supposed to be playing for and set up goals for Daniel Sturridge (4 minutes) and Victor Moses (36 minutes) to put Liverpool 2-1 up. He then remembered he was a Swansea player and set up Michu to equalise on 64 minutes. Rumours are circulating that Shelvey might decide to try his hand at refereeing and commentating on this match (at the same time) on Sunday to mix things up a bit.

Our 5-0 victory in the corresponding fixture last season is our record victory against Swansea in the league while they have yet to record a league victory at Anfield from 12 previous attempts.

Satisfied With Improvement, Daring To Dream