The 4-3 victory over Swansea at Anfield last Sunday may not have been our most dominant display of the season but with our nearest challenger for 4th Spurs going down 0-1 at Norwich City, the three points picked up against the Swans could prove to be vital at the end of the season as the gap between us and Tottenham in fifth increased to six points.

Next up is a trip to St Mary’s to face Mauricio Pochettino’s Southampton on Saturday, kick off 5.30pm UK time. The Reds have experienced very little joy against the Saints in recent times having lost five of our last seven fixtures home and away and with just two wins from our last seven league trips to St Mary’s/The Dell, they’ve turned into a bit of a bogey side. 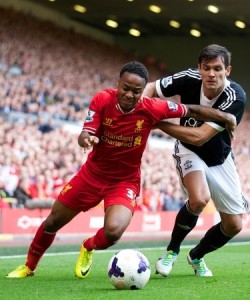 Southampton are the only side to have left Anfield with maximum points this season with Dejan Lovren scoring the only goal of the game after 53 minutes to secure the victory. The corresponding fixture last season saw us slump to a 1-3 defeat with Schneiderlin and Lambert putting the Saints 2-0 up before Coutinho halved the deficit just before half-time. Liverpool failed to find an equaliser in the second-half and Rodriguez put the game to bed with ten minutes remaining. That would prove to be our last defeat of the campaign in 2012/13 as we embarked on a 12 game unbeaten sequence before Southampton ended our longest undefeated run to date under Rodgers with that 1-0 victory at Anfield five games into 2013/14.

The Saints are currently in 9th – 17 points behind us – and have won only one of their last seven home games in the Premier League but as you will see both Man City and Arsenal have failed to leave St Mary’s with maximum points. In those seven home games, Southampton have suffered three draws (1-1 with Man City, 2-2 with Arsenal and 2-2 with Stoke) and three defeats (2-3 to Aston Villa, 2-3 to Tottenham and 0-3 to Chelsea) and just the one victory (1-0 against West Bromwich Albion).